Zircon (ジルコン, Jirukon) is one of the Gems mainly doing patrol duty. They were the former partner of Yellow Diamond who they admired a lot. They were partnered with Bort, although it is currently unknown if they are still partnered.

Zircon has an orange-yellow color scheme and wears either the winter or summer uniform depending on the season. They also wear standard black shoes but no gloves nor socks. Their hair is a bit wavy and cut short.

Zircon is an anxious Gem and always worrying about something, such as when they believed the laconic Bort hated them for not talking to them. They are extremely loyal and respectful towards their elders, most notably Yellow Diamond. Zircon has frequently sacrificed themselves for Yellow Diamond in battle and often is shattered as a result.

Zircon's most notable relationship is with Yellow Diamond, whom they were partnered with at the beginning of the story. Zircon admires and looks up to Yellow, speaking or referring to them with senpai (センパイ), an honorific used for addressing one's senior. Even though Zircon is not as strong or hard as Yellow Diamond, they keep trying to protect Yellow by putting themselves in harm's way.

Later, Zircon became paired up with Bort instead in order to improve their skills. Zircon was incredibly humbled at the opportunity, to the point of extreme nervousness. At first, Bort did not say a word to Zircon during their first days together, causing Zircon self-doubt. They realize later that Bort does not act or talk needlessly and learned to work with their new partner better. Bort reveals Zircon's main weakness: their relationship with Yellow. Bort tells them that they should look out for themselves instead of constantly trying to protect others because both Yellow and Bort are capable of defending themselves.

During the beginning of the story, Zircon's relationship with Phosphophyllite was quite similar to all the other Gems: They agreed that Phos never did anything useful. When Phos was believed to have turned into a slug and Diamond asked the other Gems for advice on turning them back, Zircon commented that there was not much of a difference in Phos' new form as they are still as useless as before. Later though, when Phos becomes stronger, Zircon thought better of them, even going to them for advice on how to deal with Bort. At that point, Zircon reveals that they always thought of Phos as a younger and junior sibling but is surprised at how much Phos has grown and surpassed themselves.

Zircon is a mineral belonging to the group of nesosilicates. Its chemical name is zirconium silicate. The crystal structure of zircon is a tetragonal crystal system. Colorless specimens that show gem quality are a popular substitute for diamond and are also known as "Matara diamond".

The name derives from the Persian zargun meaning golden-colored. This word is corrupted into "jargoon", a term applied to light-colored zircons. The English word "zircon" is derived from "Zirkon," which is the German adaptation of this word. Red zircon is called "hyacinth", from the flower hyacinthus, whose name is of Ancient Greek origin. 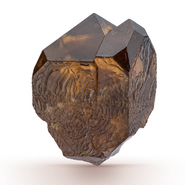 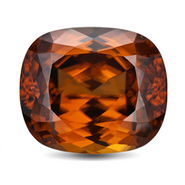 polished zircon
Add a photo to this gallery
Zircon is a birthstone for the month of December, along with turquoise and tanzanite 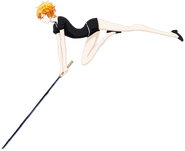 Zircon as seen in the promo cover of the anime. 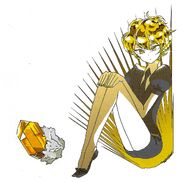 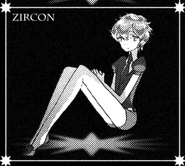 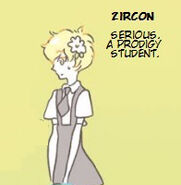 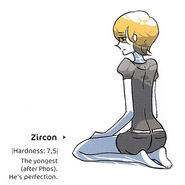 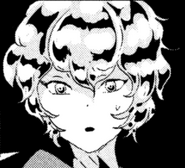 Add a photo to this gallery
Retrieved from "https://houseki-no-kuni.fandom.com/wiki/Zircon?oldid=11142"
Community content is available under CC-BY-SA unless otherwise noted.