Start a Wiki
watch 02:15
Who is Yellow Diamond?
Do you like this video?

Yellow Diamond (イエローダイヤモンド, Ierō Daiyamondo), often called simply Yellow, is one of the Gems who mainly participate in patrol duty. They are everyone's elder. They are one of the fastest, if not the fastest gem, and are currently partnered with Padparadscha.

Yellow Diamond has a yellow color palette and wears the winter or summer uniform depending on the season. They also wear standard black shoes with long gray gloves and gray thigh-high or above-the-knee socks. Their hair is cut in a medium bob style. They tend to have drowsy looking eyes that are always partially closed or lidded, giving them a relaxed or laid-back appearance.

They're always portrayed as cheerful yet mature and acts like the Gems' older sibling. They are shown to have low self-esteem and possible self-loathing for constantly letting their partners be taken by the Lunarians, and also questions why they bother fighting anymore. They feel personally responsible for all of their siblings.

When Phosphophyllite stated that they want to fight because they love Kongo-sensei, Yellow Diamond laughs and agrees. They try their best to always stay positive and has a sense of humor.

They don't seem to appreciate being called "old", as seen when they chase Rutile out of anger when the latter calls them so.

After confronting the earth gems and being damaged by Cinnabar's poison, they have become mentally unstable and thinks of them self as a Lunarian trapped in the body of a gem.

Yellow Diamond is introduced like many other Gems at the beginning of the story as a background character while the focus of the story began with Phosphophyllite. They can be seen with the other Gems during events such as recovering Phos' pieces from a shell, hibernating in the winter, and collecting the copies of Shiro.

As the story progresses, Yellow Diamond becomes one of the more frequently seen side characters. After Phos gets new legs, the story shifts focus and gives a more proper introduction to Yellow Diamond as the fastest Gem. During this time, a Sunspot appears and Yellow defends themselves while their partner Zircon reports to Kongo-sensei. Yellow is seen easily outrunning their attacks but during a moment of carelessness, they turn their back and is about to be hit by an arrow. Zircon jumps in front of them and is shattered at the neck instead. Later, as Zircon is being fixed by Yellow and Rutile, the former laments on their inability to protect all the partners they've lost, saying that they're only good for running away. Yellow states that they can't remember why they're fighting anymore. They then notice that Phos, who was previously recovering nearby and unable to move their new legs, is now gone.

Yellow searches for Phos throughout the Land and finally finds them in the swamp area. Yellow is surprised to see that Phos can now run really fast. They manage to catch their younger sibling and bring them back to the School. Along with Rutile, the Gems discuss Phos' new strength with Kongo-sensei. Yellow declines the offer to partner with Phos so instead the younger Gem is partnered with the Amethyst twins.

After a winter hibernation, Zircon partners up with Bort to gain more experience while Yellow partners with Diamond. Later, Yellow talks about this with a sleeping Padparadscha.

When three Sunspots appear together at the same time, Yellow, Diamond, and Benitoite handle one together. However, their mission fails due to Benito accidentally reflecting an arrow into the vessel.

Yellow is one of the Gems who accompany Phosphophyllite to the moon because of wanting to apologize to their lost partners. Upon learning that all abducted Gems have been ground to powder, they fall to their knees, fracturing and breaking out of shock and grief. Yellow agrees to further accompany Phos on a night raid of the School. During the raid, Yellow and Padparadscha fight with Rutile. Yellow pleads with both of them to stop but they fight both fights mercilessly without a word.

Yellow is seen as a senior to all the other Gems and is generally respected and loved by all of them. They tend to be obeyed by the rest since they are both the oldest and among the strongest as a diamond class Gem. They are often referred to as Yellow-nii-san (兄さん, older brother) or something similar, especially by Diamond. They sometimes refer to themselves as an older brother as well, especially when helping or lecturing the younger Gems.

When Phos was believed to have turned into a slug, Diamond asked all the other Gems for advice on how to turn Phos back. Among the responses, Yellow congratulated Phos for doing something so drastic. They treat Phos kindly, helping them adjust when they get new legs, but refuses to partner with Phos because they don't believe they could take care of Phos by themselves.

Zircon was partnered with Yellow during the beginning of the story and thinks highly of them. Zircon often tries to protect Yellow, even though doing so usually puts themselves at a disadvantage. When discussing Zircon with Rutile, Yellow believes that Zircon thinks too highly of them. Though it not shown on the surface, Yellow has feelings of guilt and self-loathing for losing so many partners in the past. They are very good at running, being among the fastest Gems, but that did not prevent the Lunarians from taking their comrades away.

They get along with the other diamonds quite well.

Yellow seems to have a good relationship with Padparadscha, both of whom are the oldest Gems. Yellow runs to meet Padparadscha as soon as they heard news of the Gem waking up. They did not manage to meet before the latter fell back into sleep, but afterward Yellow talks to the sleeping Padparadscha anyway, reminiscing about various subjects. Yellow is also seen hanging out with Alexandrite, who is also among the elder Gems. At one point Yellow can be seen sleeping in Alex's room.

Diamond (from the ancient Greek ἀδάμας – adámas, meaning "unbreakable", "proper", or "unalterable") is one of the best-known and most sought-after gemstones. Diamond is the only gem made of a single element: It is typically about 99.95 percent carbon. The other 0.05 percent can include one or more trace elements, which are atoms that aren't part of the diamond’s essential chemistry. Some trace elements can influence its color or crystal shape. The hardness of diamond and its high dispersion of light – giving the diamond its characteristic "fire" – make it useful for industrial applications and desirable as jewelry.

It forms under high temperature and pressure conditions that exist only within a specific depth range (about 100 miles) beneath the earth’s surface. Diamond’s crystal structure is isometric, which means the carbon atoms are bonded in essentially the same way in all directions.

Yellow is the second most common fancy color of diamonds. Yellow diamonds are sometimes marketed as “canary.” While this isn’t a proper grading term, it’s commonly used in the trade to describe fancy yellow diamonds. 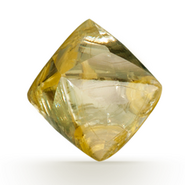 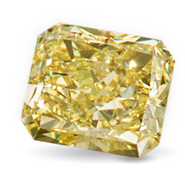 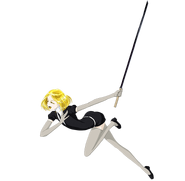 Yellow Diamond as seen in the 2017 anime's official render. 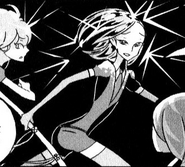 Yellow Diamond in the manga

Yellow Diamond reference (with Bort on the left side)

Yellow Diamond falldown
Add a photo to this gallery
Retrieved from "https://houseki-no-kuni.fandom.com/wiki/Yellow_Diamond?oldid=9986"
Community content is available under CC-BY-SA unless otherwise noted.