Watermelon Tourmaline (ウォーターメロントルマリン, Uōtāmeron Torumarin) is a Gem who has only appeared briefly. They're shown to have patrol duty and is partners with Hemimorphite.

They have a pink and lime-green color scheme. They wear either a winter or summer uniform depending on the season. They also wear standard black shoes but no gloves or socks. Their hair is long and looks voluminous, resembling Morganite's. The hair is mainly lime green except for a pink flower shape on top of their head. The pink color also extends to their eyes, which are generally large and show off a lot of white. Their mouth is usually in the "v" or "^" shape or an "o" if their mouth is open.

Watermelon Tourmaline is an energetic and excited Gem, often seen with their emotions clearly on their face. They're described as always having their head in the clouds.

Watermelon Tourmaline is able to produce an electrical charge. They are capable of releasing this charge as an attack. It appears effective against Lunarians and doesn't seem to effect nearby Gems. Although in the character profiles it states that they are able to do this when surprised, scared, or otherwise stressed out, they have only produced it once when stating that the Lunarians have made them "really angry".

It's assumed that Watermelon and Hemimorphite have a good relationship with each other, as they seem to constantly be with each other even after work is finished. They also wished to remain with each other after Phos took some of the Gems to the Moon and neither of the two left.

Tourmaline is a crystalline boron silicate mineral compounded with elements such as aluminum, iron, magnesium, sodium, lithium or potassium. Tourmaline is classified as a semi-precious stone and the gemstone comes in a wide variety of colors. Watermelon tourmaline is a variety with green on the outside and pink on the inside. Tourmaline has a natural pyroelectric charge, which is one of the properties used to identify tourmalines. This is generally due to the iron and manganese contents of the mineral, and are generally found with the use of neodymium magnets. The metal inclusions also give tourmaline its colours, with iron usually giving it a darker colour (schorl) and manganese giving it a yellow colour (tsilaisite), although these can be included in other colours. Pink and red tourmalines tend to have the lower charges however.

Watermelon tourmaline on quartz matrix.
Add a photo to this gallery

Watermelon Tourmaline alongside the others Gems, to the right of Kongo and behind/between Rutile and Bort. 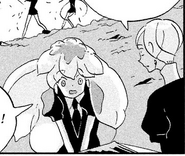 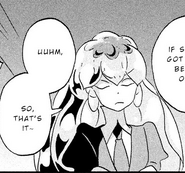 Add a photo to this gallery
Retrieved from "https://houseki-no-kuni.fandom.com/wiki/Watermelon_Tourmaline?oldid=9984"
Community content is available under CC-BY-SA unless otherwise noted.