Start a Wiki
watch 01:14
Who is Ventricosus?
Do you like this video?

She was dropped by the Lunarians at the Gems' school and ate Phosphophyllite.

She told Phos later on that her brother was taken and everything in her homeland was stolen, ruined, and deserted because of the Lunarians.

She appears as a giant slug with a spiral shell who proceeds to attack the Gems. She then shrinks into a much smaller slug and claims that it's her original form.

Later, Phosphophyllite agreed to take her to the sea where she transforms to a more human-like form, which she states is her "true, true" form. Her 'clothing' is a baby pink colored dress, akin to a jellyfish. She also appears to have ample, human-like breasts, which Ventricosus claims are her especially important parts.

Phos voiced their opinion that she looked like a jellyfish. She denied it, saying that her species is much sexier.

She said she loves prim types (formal and proper). She thinks all the Gems are "cuties" and that their sensei is a "hottie".

Ventricosus is very flirtatious and sarcastic. Ventricosus seems kind and is saddened when she is forced to betray Phos, using them as a trading tool when Phos only wanted to form a friendly connection with her. Later on, she decides to not act like the Lunarians and gave Phos a part of her little brother's shell to be their new legs.

She likes the Gems, appearance wise. The Gems think the small form of her is cuter and smarter than Phos. She finds Kongo-sensei attractive, but the latter doesn't understand her words and only think her as a friendly slug. When asked by Phos, Ventricosus said that she ate Phos because Phos' color makes them look tasty. She spends some time with Phosphophyllite and teaches them about death.

Ventricosus is surprised by Phos' acceptance of her betrayal and agreement to be used as a bargaining tool for her comrades after they know her reasons. She then changes her mind and refuses to act like the Lunarians.

She likes Diamond and thinks Cinnabar is smart, as they took one look at her small form and knew Phos was stuck in her giant shell.

She seems close to her little brother, Aculeatus, though she refers to him as 'good for nothing except eating and fighting'.

Ventricosus in snail form in the anime 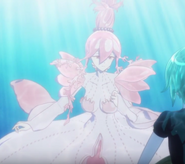 Reference
Add a photo to this gallery
Retrieved from "https://houseki-no-kuni.fandom.com/wiki/Ventricosus?oldid=9983"
Community content is available under CC-BY-SA unless otherwise noted.