Variegatus is the current ruler of the Admirabilis, ascending to leadership five generations after Ventricosus.

As with other Admirabilis, Variegatus has both an animal form and a human form. Her animal form is that of a small slug, similar to the slug form of Ventricosus, though a bit smaller. Her body is pale while her head is darker. She had a shell but it was not shown as she lost it before meeting Phosphophyllite.

Her humanoid form is comprised of an upper human torso with a lower octopus-like body with many short tentacles. As with other Admirabilis, parts of her body resemble clothing: she appears as if she were wearing a fancy embroidered dress while her lower half resembles a hoop skirt. Her head has a crown with a large spherical object at the top.

Variegatus is more child-like than her predecessors, perhaps due to the fact that she is most likely younger than Ventricosus when they each met Phos. At home, she was told that she was helpless and lacked the talents of her predecessors so she wanted to prove herself by venturing into the land on the surface that everyone else feared. Despite the legends told by her people about the dangers of the land, she approached it without much fear or apprehension. Despite her inexperience, she is an ambitious person who wants to go to the Moon to rescue the rest of her relatives.

Variegatus is a cheerful but forgetful person. When Phos asks her about key events of the past, it took her a long time of thinking before she remembered. Much like Ventricosus, she mentions that she liked the "beauties" found on the land, referring to the Gems.

During a battle with the Lunarians, Phosphophyllite lost bits of their hair which dropped into the sea. While searching for them underwater, someone hands Phos a strand, but they disappear before Phos could see them. Later, some of the younger Gems help Phos look for their hair and find a small slug which they play with. They put the slug in the school's pond where the jellyfish start attacking it. Phos was nearby and hears the slug uselessly commanding the jellyfish to stop. They rescue the slug, who recognizes the smell of Phos' legs as pieces of the shell from her ancestor Aculeatus, who met Phos a hundred prior. Variegatus calls the Gem "Pospopilizliz", a mispronounciation of Phosphophyllite's name due to errors made when passing down Ventricosus' legend from generation to generation. She also mentions that her people are afraid of the surface because of the tales Ventricosus told them about her experiences, especially regarding Rutile's attempted dissection on her.

Phos had forgotten the information that Ventricosus told them during their time in the sea so they ask Variegatus if she knows any legends about the Gems or Lunarians. Variegatus has heard many legends among her people but cannot remember the one that Phos needs. Disappointed, Phos goes to the beach to return Variegatus into the sea. Variegatus mentions that Ventricosus regretted betraying Phos to the end of her life, to which Phos offers a piece of her leg as a sign of forgiveness. Variegatus is joyful and swallows the piece to keep it safe. She then goes into the water where she transforms into her human form. At that moment, she recalls the legend that Ventricosus once told Phos about an ancient animal known as humans who split into three parts: the Flesh, the Bone, and the Spirit. She also mentions that she intends to go to the Moon to rescue the rest of her people, causing Phos to realize what they must do to rescue the other Gems.

Variegatus mentions that her people in the sea are still few. Not much is known about her home or her relationship with her people, except that she wishes to prove herself despite lacking the talents her predecessors had.

Variegatus seems to take a liking to the Gems, calling them "beauties", despite the legend she's heard about how dangerous they are. Unlike Ventricosus, she has only had a limited experience and has not met all the Gems before returning to the sea. She is particularly fond of Phos, or "Pospopilizliz", due to the legends surrounding them. 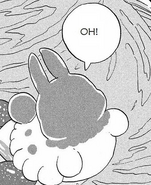 Variegatus' slug form.
Add a photo to this gallery
Retrieved from "https://houseki-no-kuni.fandom.com/wiki/Variegatus?oldid=9982"
Community content is available under CC-BY-SA unless otherwise noted.