The Moon is the home of the Lunarians and where abducted Gems and Admirabilis are held hostage.

According to various legends in the series, the planet on which the story takes place (presumably Earth) was visited by six meteors, which broke the planet six times, creating six new moons. While it can be assumed that the Lunarians reside on the original moon, this has not been explicitly stated. It does not appear that anything lives on the other six moons, as Aechmea was able to build a home for Cairngorm for complete isolation on another moon.

The Lunarians are the spirits of humans who have remained trapped in this existence since they cannot pass onto the next world. Prince Aechmea implies that the Moon is where unpurified souls eventually wander to until they can be cleansed with prayer and move on. He states that the Lunarians have been trying to pass on for tens of thousands of years, though presumably souls have resided on the Moon while humans and other animals still existed far before that as well. On the Moon, they have built a small civilization consisting of at least one town-like structure where they reside. This structure contains many facilities such as factories, gardens, laboratories, and places to dine.

For thousands of years, the Lunarians have travelled to the Land to attack and kidnap Gems. At first, they tried to persuade the Gems to cooperate but that did not work so eventually they decided to grind all captured Gems to dust and spread them over the surface of the Moon. They plan to do this for a very long time until the Moon shines with the Gem's shards. They have also kidnapped all of the Admirabilis and use them as cattle. Larger Admirabilis can be seen grazing on the Moon's surface, eating up sand to build their shells.

At some point later in the story, Phosphophyllite infiltrated the Moon by letting themselves be captured. They were able to learn about the Moon and the history of the Lunarians. They made an agreement with Prince Aechmea to bring more Gems back to the Moon in return for the attacks to stop and for the revival of the previously captured Gems.

The Moon consists of mostly barren land dotted with craters. Deep below the surface exist the oils and metals that the Lunarians extract to create their structures. The top level of the Moon is fine dust or sand of gemstones, created by the Lunarians when a captured Gem is ground up and scattered across the surface. It's unknown how thick this layer is, but the Lunarians had expressed desire to continue building it up, up until Phosphophyllite arrived on the Moon. The Admirabilis can be seen feasting on the sand. The atmosphere is described to be too harsh for lower hardness gems to be last on.

Although there is no specific name for the Lunarian settlement, the Moon contains a large city like structure that the Lunarians reside in. The building appears to be one structure rather than smaller ones separated, and are boxed in within its confines with four walls. The structure is built out of oils and other materials that are found on the Moon, and are constantly changing each day by melting away and reordering into a new structure. The only consistency appears to be the design of it. The Lunarian structure is highly geometric and generally has 90° angles with layering. The only curved features are smaller ornaments that are symmetrical along the y-axis. The designs of the structure resemble hopper crystals, which are most often associated with bismuth crystals, a synthetic version of the element bismuth that grows in spirals, but on flat 90° angles rather than a constant curvature.

It's unknown how large or long the single structure is.

The style of the structures is most likely in contrast of the organic like structures found on Earth with the Gems, simulating synthetic and artificial as these shapes are hardly ever found in nature. It's also possibly based on minimalistic architecture that often incorporates flat planes of design which became popular during the mid 20th century.

The Lunarians hill changes everyday so some locations may not be permanent. Others are implied to have existed for longer periods of time. Note that most of these places are not explicitly named in the series so the names used in this article are for the sake of organization and convenience.

At one end of the hill, the road extends out into a large platform. Here is where the Lunarians disembark and travel to and from the Land. When leaving, the Lunarians adopt the appearance that they are mostly seen with when emerging as sunspots. A large figure stands in the middle with many normal-sized sundries surrounding it. They are then covered in a cloud that is revealed to be both a device for transportation as well as cloaking. The appearance of the sunspots as seen from the Land is in fact this device opening up.

When Aechmea was explaining their people's history to Phosphophyllite, they sat in various locations where they were served food and drinks, including alcoholic beverages. At first, they both ascended a stairway to a dining room with an elegant table set by a large window. After eating here, they moved on to an open area where they sat by a counter. Here, Aechmea indulged in several alcoholic beverages.

This facility is a large space filled with spheres either suspended or lifted by pillars. Here is where synthetic gems are produced from minerals found on the Moon using heat and pressure. Within the spheres, eight kinds of metals and carbon undergo high temperatures and pressures to create various gems, including diamonds, corundum, and beryl. On the ground floor, the synthetic materials are processed into tools, weapons, or shaped into artificial Gems.

The Lunarians also have a experimental facility meant to create synthetic humans, presumably so that they can pray and purify the spirits and allow them to pass on although it's not stated. It is mostly shown to be a large tank of liquid with moving white strands called "human particles". There is apparently a strange music that plays in this place. Both Phos and Semi did not feel comfortable being here. It was shown in Chapter 56: Synthetic Pearl, but is never mentioned again.

Gem housing is a place built for the Gems that have decided to reside on the Moon. They do not melt at night and tend to remain the same. It features bedrooms, elevators, and a large Atrium with sitting area and a television to display announcements, as well as a front desk with Lunarians to serve the Gems. The furniture and features more resemble the exterior of the Lunarian structures with the angular and geometric styles. The bedrooms and there furniture are quite large in scale, and one wall is open to the Atrium and one wall facing the outside. The atrium is very large, and mainly consists of a pool with various waterfalls coming from above into it. There are bridges over the water to the centre of the pool where a seating area is.

Barbata's workplace that features counters and spaces to research and test. Barbata can often be found here along with other Lunarians. Amethyst 84 was taught science by Barbata in this area.

Despite being on the Moon, there exists an unnamed garden with a large amount of foliage and plants. Aechmea can be found here and enjoys relaxing in this area. Later on the Gems have occasional meetings with Aechmea here.

A large area housing individual machines that are meant to restore Gems that have been ground into dust on the Moon. This area is currently inactive.

A space used by the two fashion designers, Quieta and an unnamed student Lunarian. There are tables and other tools, as well as fabric, in order to create clothing. There is also a large board in the middle of the room with papers of the proposed outfit designs. 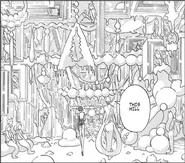 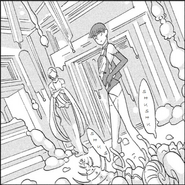 The Lunarian structure 'melting' at the end of a day

Just on the exterior of the Lunarian structure 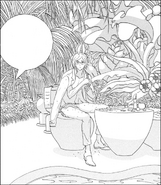 Aechmea in the Garden 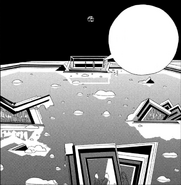 Phos's initial bed on a tower, with steps seen leading up to it.

Seating area in the Atrium of the Gem Housing 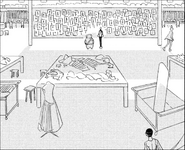 Bedroom in Gem Housing (with Diamond) 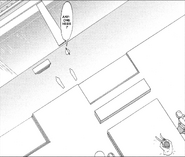 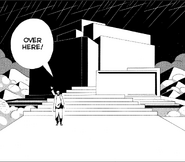 Exterior of the Gem Restoration Area 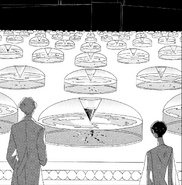 Interior of the Gem Restoration Area

Interior of the Gem Restoration Area

Stage area with the Wedding

Audience area for the stage

Nearly full footprint of Lunarian settlement, with moon landscape in the background

Various locations in the Lunarian settlement 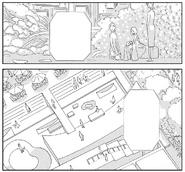 Various locations in the Lunarian settlement, included here is the park and skate park

The only other building known on another Moon, in development by the Lunarians for Cairngorm

Aechmea's observation room
Add a photo to this gallery
Retrieved from "https://houseki-no-kuni.fandom.com/wiki/The_Moon?oldid=9669"
Community content is available under CC-BY-SA unless otherwise noted.