The Land is an unnamed area, the only land of the earth that the story takes place in. It is shaped similarly to a crescent, surrounded by the sea, and has one beach. The Land is constantly attacked by the Moon People in order to capture the Gems. The Gems' main duty is to patrol the land and inform their sensei if the Moon People come.

The land is the home of The Gems, some plants, and some small organisms.

There has been shown to be birds, butterflies, and bees and according to Cinnabar, there are shelled organisms on the beach.

The jellyfish that normally live in the sea are also abundantly found in the school's pond. It is unknown how they got into the pond, but most likely the Gems moved them for lighting purpose. The jellyfish seem to be aware about the Gems and can interact with them in very basic ways. Euclase once asked for anti-salt resin to protect themselves before dipping into the pond, implying that the land does not have fresh water.

The Land appears to be in its early stages of redevelopment of habitats, despite it being thousands of years since the Gems have resided on the Land and appear to not comment on the change. As the Earth was impacted enough, it can be assumed that this piece of land that rose up is a consequence of that and suffered greatly before organic life was able to live on land. This cycle usually happens with impacted zones (whether through disasters or cutting forests to clear them to restart the cycle), with the Land appearing to be stuck in the early stages of secondary successional habitats. There doesn't appear to be much of a forest on the Land, and it is mainly a grassland biome of a temperate climate.

The Land experiences the typical wide range of seasons, although it is unsure of how much the temperatures differ but it's obvious it experiences a warm summer and cold winter. The summers are warm enough to allow plant life and other organic life to thrive in, while winters become cold enough to allow snow and salt water to freeze.

Large rock formations are seen coming out of the earth, possibly due to the impact. These include the rock at the Shore of Nascency where Gems are "born" out of, and the large solid piece of quartz that was carved into to make the School.

As told by Kongo-sensei

According to Kongo-sensei, six meteors had visited the planet in the past. After the planet was broken by the sixth meteor, it gave birth to six moons, leaving it an emaciated shadow of its former self. There was nothing left but a single beach, so all life fled to the ocean. Some creatures who had flourished when there was still one moon were too slow in their escape and sunk into the seas. They were eaten by tiny creatures on ocean's floor, turned to inanimate objects, crystallized over the ages, and thrown back to the beach.

According to the Admirabilis, their legend said once there lived animals called humans who lived and persevered on the land until it was broken five times. When it broke the sixth time, they entered the seas. It is said that there, they split into three parts; the spirit, flesh, and bone. In other words, they evolved into three different species and lived on. The Admirabilis are said to be the flesh, a mortal species that can reproduce and live and die, inheriting the ability to expand and pass down the knowledge. The Gems/bones are said to have made a contract with other living creatures in the sea, and gained the ability to become immortal, they return to the land. The spirit are said to be wandering, attempting to regain its flesh and and bone, and returning to their older form.

Along the southwest lies the Shore of Nascency (緒の浜, o no hama) (also translated as Beach of Beginnings or Cord Shore), where crystals and metals have risen from the ocean floor, oozing from the rock formations found there. In rare instances, they will take the form of fully humanoid Gems. This is the site of Antarcticite's abduction, where Phosphophyllite's new arms were found and attached, and where Rutile picked suitable ruby samples for Padparadscha.

The swamp is a wet, murky location with a few dead trees scattered around. Phosphophyllite was found here when they could not control the speed of their new legs.

Located in the south of the land. This is the site of Heliodor's abduction by the Lunarians and a frequent haunt of Cinnabar's.

Is located on the west of the land. The Moon People 'Sunspot' commonly appears in that area.

The Forest of Blue

The Hills of White

Most likely near the Hollow Cape. This is where Cinnabar lives, isolating themselves here.

The School is where the Gems study, work, and reside. It is a large, spacious building located somewhat in the centre of the Land. The building has six floors, narrow halls, lots of rooms, and many big windows. The building has suffered occasional damage whenever Kongo-sensei becomes angry, as well as during the winter when he falls asleep and crashes into a pillar. The School has also received damage during certain Moon People attacks.

The first floor is the main floor where most of the story takes place in. It is where the gems work, study and hang out. The second floor consist of a sit-down area and bedrooms for the gems including Cinnabar and Alexandrite’s rooms. The third floor is the convalescent center where Ghost Quartz formerly worked. It is also the hibernation floor and is mostly covered in grass. The fourth floor has never been shown but its is assumed to consist of extra bedrooms . The fifth floor has currently never been stated or seen in the manga or anime. And the sixth floor is Kongo’s room where he meditates.

The front of the school has a pond filled with jellyfish and a bell hanging from a tall stand. The bell is used to signal other Gems both within the School and on patrol all over the island. The Gems ring the bell a certain number of times for certain signals, including Sunspot sightings, warnings to stay put, and warnings to retreat back to the School. There is also a smaller looking school that serves as a storage building.

Design for the animation version.

Design for the animation version.

The Land and the School. 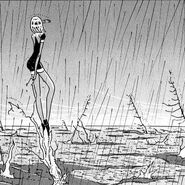 The front of the school
Add a photo to this gallery
Retrieved from "https://houseki-no-kuni.fandom.com/wiki/The_Land?oldid=10123"
Community content is available under CC-BY-SA unless otherwise noted.