Rutile (ルチル, Ruchiru) is one of the Gems and mainly works as a doctor. They repair the cracked or broken Gems and also handle the management of herbs, pastes, powders, and other medical remedies. The other Gems have commented on their "nice long legs", saying that they give them the appearance of a model.

They are always found at work or sleeping on one side of the hall, surrounded by cupboards, boxes, and herbs. They are the partner of the unstable Padparadscha, whose body they are trying to maintain.

Rutile has two colors in their hair, golden-yellow, and reddish-brown. Their hair is an asymmetrical bob cut, styled to the right side. It is colored brown on the left and yellow on the right. Their eyes are golden-yellow, while lashes, eyebrows, and other features are red.

They wear the standard winter or summer uniform depending on the season under a white lab coat. They also wear black sandals with kitten heels, as well as black gloves and stockings that completely cover their arms and legs. They are described as having long legs like a model.

Rutile takes their job very seriously. They are known to stay up all night if need be to put a Gem back together. As a result, they are often tired and known to take naps during the day.

They have also been shown to be a bit eccentric and sarcastic, and to take great pride in their job and research, whether dissecting animals or studying the physical composition of Gems' bodies. They don't take well to having their medical authority questioned. Even so, they still become easily embarrassed when pestered about things like love.

They dedicate a great deal of their research into finding compatible parts for their partner, Padparadscha, who has been inactive due to their unique composition.

In the latest chapters, Rutile's mental state has been broken after losing Padparadscha. They have become more impulsive and feral in nature, their hair unkept and falling straight down. Seeing Padparadscha whole and awake seemed to be unchanging of this nature however, as Rutile attempted to attack Padparadscha along with Phosphophyllite and Yellow Diamond. This has lead to Rutile becoming unable to be reasoned with, when even Padparadscha returning to them and them clinging onto the piece of Padparadscha that was given as a "gift" by Padparadscha. They appear to be unresponsive although awake.

As the Gem's doctor, Rutile is one of the more frequently seen characters who are more knowledgeable about the Gems health and bodies, often providing explanations for how they work. They were introduced along with the other Gems in the beginning of the story when Morganite and Goshenite fought the Lunarians alone and were defeated. After the fight, Rutile helped piece them back, as well as the pieces of Heliodor that they collected and Phosphophyllite who was broken when Kongo-sensei scolded the two. At this time, Rutile explains the nature of the Gems and how they have microscopic organisms called inclusions within their bodies which allow them to move and make them basically immortal. They state that even if a Gem is broken, ground to dust, and scattered into the bottom of the ocean, this is simply suspended animation and the Gem could be revived if put back together.

After Phosphophyllite is assigned the creation of a natural history encyclopedia, they ask various Gems for advice on what to do, including Rutile. The doctor tells Phos that it should include things they currently don't know about and suggest that Phos talk to Cinnabar for help since the latter is always outside. Rutile explains Cinnabar's conditions to Phos, including how they are able to stay awake at night and why they avoid other Gems. Phos encounters the Lunarians while searching for Cinnabar and in the ensuing battle, both end up damaged. Rutile fixes them both but also has to scrape away parts of Phos' body since it has been covered in Cinnabar's poison. They explain that Gems carry their memories within their entire body so losing parts of them means losing bits of memory as well. They ask Phos if they forgot anything, but the younger Gem seems to be fine.

After Phos was believed to have turned into a slug, Diamond sought the help of the other Gems in turning them back. At first, the slug was left in Rutile's care, but after seeing how eager the doctor was to dissect the animal, Diamond took the slug back and sought the other Gems for help instead. Later, when it is revealed that Phos was actually incorporated into the slug's shell, all the Gems gathered the pieces of Phos and had Rutile spend all night piecing them back together.

Later, Euclase comes to ask Rutile for some anti-salt resin so that they can enter the pond to retrieve some fallen documents. Rutile is unable to find the pot of resin, and at the same time, Red Beryl arrives to ask the two about a missing uniform. All three find Phos with the items, attempting to sneak into the ocean with Ventricosus. Despite being forbidden from doing so, Phos manages to sneak away anyway. That night, Rutile goes with other Gems to the sea to search for Phos, but they end up being brought back ashore next to Cinnabar with missing legs and two pieces of agate. Cinnabar drags Phos back to the school and leaves them to be found by the other Gems. Rutile spends the rest of the night fixing Phos and crafting the agate into new legs for them.

When Phos joined the Amethyst twins, a new type of Lunarian appeared and caught the twins in a trap, shattering them. The Lunarians were defeated by Bort and Kongo-sensei, and Rutile spends the night repairing the twins. Soon, winter comes and most of the Gems including Rutile enter hibernation.

The next year, Shiro attacks the school and became split up into puppies, Rutile found one and their immediate reaction was to dissect it, which caused it to split into another two puppies. They also spent time later fixing up Diamond, who was damaged during a fight with Shiro.

Soon afterward, Rutile heads towards the Shore of Nascency to look for pieces of a ruby in order to revive their partner, Padparadscha, who was born with holes in their body and therefore spends most of the time asleep. Phosphophyllite joins them and directs the doctor to some rubies that they saw buried during winter. Rutile takes the pieces and carves them into the correct shapes before inserting into Padparadscha. The Gem reawakens, and Rutile reveals it's been 231 years, eleven months, and one day since they were last awake, and that this is the 300,030th operation the doctor has performed in an attempt to wake them up. Padparadscha goes for a walk with Phos to discuss the Lunarians before the former loses consciousness again. Rutile arrives to gather them back. Later that day, Yellow Diamond arrives because they heard Padparadscha was awake and wanted to reminisce about old times. Rutile tells them that the Gem has returned to sleep and teases Yellow for being an old-timer.

Sometime later, a rare event occurs where three Lunarians sunspots appear at the same time. Kongo-sensei, Phos, and Ghost Quartz engage one of them. Ghost falls into a trap and is almost taken away before Kongo-sensei saves them. At that moment, Phos notices that Kongo-sensei attacks by breaking off pieces of his own body and flinging them at the Lunarians. When Ghost is being fixed by Rutile, Phos asks them if they have ever fixed Kongo-sensei. Rutile states that Kongo-sensei is the hardest of them all and never required fixing, though they are dying for a chance to do so.

When annoyed with Rutile, the other Gems call them a 'quack doctor' (やぶ or 藪, Yabu). However, they are always grateful to Rutile when they fix them.

Rutile took care of the Gems and knows their conditions and habits best. Besides repairs, they are responsible for carrying out regular physical checkups and applying powder and saltwater resin to their bodies. They were willing to explain many things to Phosphophyllite, including why Sensei relieved them from their first job. They also want to visit Cinnabar to fix them and give them the winter uniform.

They are very close to Padparadscha, their former partner, despite nowadays being unable to spend time with them. Hundreds of thousands of failed operations to fix them have not made them lose hope. They believe they cannot be called a doctor if they cannot solve Padparadscha's condition. They are extremely dedicated, bordering on obsessed with this task.

It can be assumed that Rutile has a nice relationship with the other Gems and Sensei.

Rutile is a mineral composed primarily of titanium dioxide, and the most common natural form of it. Rutile is well known for its habit of forming needle-like inclusions within other minerals, especially Quartz, in the form of long and slender yellow straw-like crystals. These inclusions can range from scattered needles to dense parallel fibers within a host mineral. This combination is known as Rutilated Quartz and is used both as a collectors mineral and gemstone.

Rutile derives its name from the Latin rutilus, red, in reference to the deep red color observed in some specimens when viewed by transmitted light. Natural rutile is rarely found as a gemstone (it is mostly seen as inclusions in other gems) and is classified as a collector's stone. 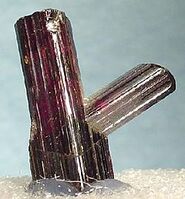 Rough rutile
Add a photo to this gallery

"Please cooperate for the sake of science, public benefit, and my personal research." - Rutile, to Phosphophyllite.

Rutile as seen in the 2013 Promotional Video. 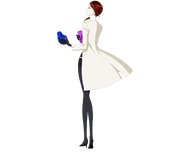 Rutile as seen in the promo cover for the 2017 anime. 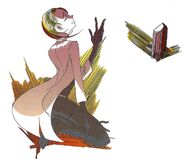 Rutile in the manga 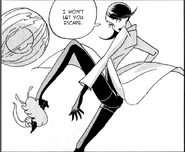 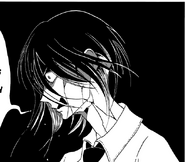 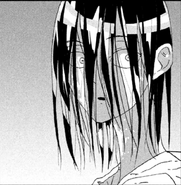 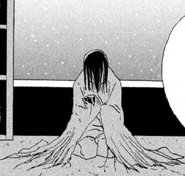 Rutile clinging on to a piece of Padparadscha

Add a photo to this gallery
Retrieved from "https://houseki-no-kuni.fandom.com/wiki/Rutile?oldid=11449"
Community content is available under CC-BY-SA unless otherwise noted.