Red Beryl (レッドベリル, reddoberiru) is one of the Gems who works as a tailor and fashion stylist. They're in charge of textile and clothes. Their style when creating clothes is usually frilly, cute, and feminine. They take fashion very seriously and love their job.

They have a red-magenta color scheme and wears either the winter or summer uniform depend on season. They also wear the standard black shoes and occasionally black gloves, but no socks. Their hair is medium long and the style changes on a daily basis (in the manga). They typically wear a needle pad on their arm.

In the anime promotion art, they are wearing star-shaped accessories in their hair.

Red Beryl is quite passionate and dedicated about their job. When Phos stole their newly created underwater uniform, they didn't get angry, but rather took this as a chance to make adjustments on the uniform using Phos as their model. When Cairngorm once talked down their job by telling them to stop making gowns for hibernation and what was the point of it, they gave a long passionate speech about art. Rutile commented on how they repeat this speech every year with only slight variations, demonstrating their obsession for their job.

Like Alexandrite, they have a single-minded interest in their job, though their personality isn't as over the top as Alex.

Red Beryl seems to have a good relationship with all the Gems, though her passion for her job may sometime annoy the others. She seeks any and all opportunities to have the Gems try out their clothing. When asked by Phosphophyllite about something new to put in natural encyclopedia, they asked Phos to help them instead. When Diamond took Phos the slug and asked Beryl for advice, they put it a ribbon so it look better instead, and when Phos took their latest uniform without permission, they were more concerned about how it how it looked. After Phos got their new legs, they promised to make Phos cute pajamas.

They believe that Diamond is the best model as they're considered to be the cutest.

Like how other Gems treat each other, it can be assumed that Beryl have a nice relationship with their siblings, and also like and trust their Sensei.

Red beryl (also known as "red emerald," "scarlet emerald," and "Bixbite") is a red variety of beryl. Beryl is a mineral composed of beryllium aluminium cyclosilicate. The hexagonalcrystals of beryl may be very small or range to several meters in size. Terminated crystals are relatively rare. Pure beryl is colorless, but it is frequently tinted by impurities; possible colors are green, blue, yellow, red, and white.

Red beryl was originally named bixbite by Alfred Eppler in honor of Maynard Bixby [1853-1935], miner and mineral dealer of Salt Lake City, Utah. Its name changed to red beryl to remove any confusion with the species bixbyite, named after the same person. Red beryl is very rare. 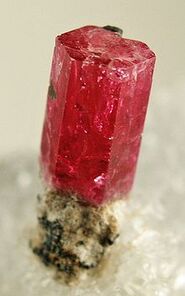 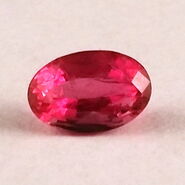 polished red beryl
Add a photo to this gallery 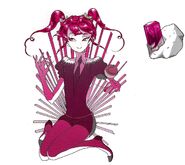 Red Beryl as seen in the promotional cover of the 2017 anime. 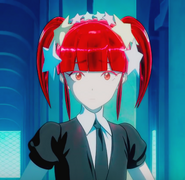 Red Beryl in the anime 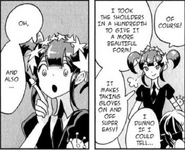 Red Beryl (hair variation) when Phos came back from the Moon 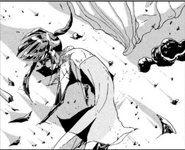 Red Beryl (broken) after attempting to chase down taken Gems

Hair variation
Add a photo to this gallery
Retrieved from "https://houseki-no-kuni.fandom.com/wiki/Red_Beryl?oldid=10570"
Community content is available under CC-BY-SA unless otherwise noted.