Start a Wiki
Pink Topaz (ピンクトパーズ, Pinku Topāzu) is one of the Gems, who presumably did patrol duty. They are currently a captive on the moon.

They are assumed to have a pink color feature. Their hair is parted to the left, with sharp edges accentuating the wave. Their bangs fall to the right of their head, away from their sight. Two frontal locks are present on either side of their head. From their appearance in the manga, they seem to be quite joyful.

Like how other Gems treated each other, it can be assumed that Pink Topaz has nice relationships with their other siblings and also like and trust their sensei.

Topaz is a silicate mineral of aluminium and fluorine, crystallizes in theorthorhombic system, and its crystals are mostly prismatic terminated by pyramidal and other faces. Pure topaz is colorless and transparent but is usually tinted by impurities; typical topaz is wine red, yellow, pale gray, reddish-orange, or blue brown. It can also be white, pale green, blue, gold, pink (rare), reddish-yellow or opaque to transparent/translucent. The color varieties are often identified simply by hue name—blue topaz, pink topaz, and so forth—but there are also a couple of special trade names.

Pink topaz is one of the accepted hue to be called imperial topaz and one of the gem's most expensive colors. It's rare in natural form, or can be made with heat treatment or another enchantment technique called thin-film deposition.

Topaz is pleochroic, meaning that the gem can show different colors in different crystal directions. It's hardness is 8. 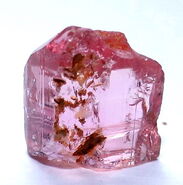 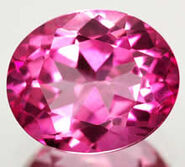 polished pink topaz
Add a photo to this gallery
Imperial topaz is the gem of the 23rd anniversary.

Retrieved from "https://houseki-no-kuni.fandom.com/wiki/Pink_Topaz?oldid=9971"
Community content is available under CC-BY-SA unless otherwise noted.