View source
watch 02:22
Who is Padparadscha?
Do you like this video?
Play Sound

Padparadscha (パパラチア, Paparacha) is one of the Gems who was mainly on patrol duty. They were born with an incomplete torso, which leaves them unconscious most of the time. They are the partner of Rutile, who works continuously to devise replacements for their missing parts in order to cure them of their unstable condition. Rutile has not yet achieved this and has only managed to keep them awake and active for short amounts of time.

Padparadscha has a light-red color scheme and wears either the Winter or Summer uniform depending on the season. They also wear standard black shoes and gray thigh-highs, which are very loose on the right leg. Their hair is ankle-length, voluminous and very disheveled with messy bangs that covers their eyebrows.

Their abdomen and chest possesses many holes, which need to be filled with other gem pieces for them to function. When they are awake, they keep their shirt open, exposing their 'defective' torso.

Padparadscha wore a Moon Outfit during the Night Raid. The outfit consisted of a light micro-dress which exposed their 'defective' chest that was pleated at the sides with large, transparent, two-layered sleeves that are above their elbows. They also had holes that are aligned on their light tights, they wore light boots with wedge heels aswell as thick bracelets placed on their ankles and wrists that are adorned with pearls. Padparadscha wielded a long sword during the Night Raid.

They are very easygoing, friendly, and calm. They have a strong sense of humor. There are some hints that they know more than they let on. They wish for Rutile to give up on trying to save them.

They seem to show sympathy towards Phos, as the two share similarities in their body composition and they even went to Earth and used themselves as a distraction by ripping out a chunk of themselves so Phos could go back to The Moon.

But during the Night Raid, Padparadscha personality took a great change as they showed no sympathy and they didn't seem to care about their friends anymore as they instantly broke anyone in their way, including Rutile.

After Phosphophyllite tells Rutile about a few ruby pieces on Shore of Nascency, Rutile starts operating on Padparadscha, and, much to Rutile's and Phos's surprise, Padpa wakes up. Padpa then asks how long were they out, to which Rutile replies with "231 years, 11 months, and a day", which instantly surprises Padpa as that was their longest without getting up. Rutile tells Padpa this is due to their failure and incompetence as a doctor, to which Padpa quickly changes the conversation to Phos, recognizing them as the one who was always clinging to Kongo-sensei, and that they have a much different vibe since they last met. Padpa also notes Phos's arms as a metal alloy and how they're alike in that sense and that Phos had it rough. Phos asks if they can speak in private with each other, and Padpa asks Rutile if they can head outside but sees that Rutile already passed out so they head out on their own.

Padpa tries to make small talk with Phos but quickly realizes that Phos is a "bad little gem", trying to laugh it off only to stop once Phos says that they wanna speak to the Lunarians and find out the truth and asks if that makes them a bad little gem. Padpa is caught off guard but gains composure and tells Phos that they want Rutile to stop operating on them, that they don't want the doctor to work so hard but is afraid on how Rutile will take it. Padpa continues on and tells Phos that the pure truth will change the entire world in ways you don't expect, and they should tread carefully, before quickly passing out. Rutile approaches them both and asks Phos if they got to ask what they wanted, but Phos just says that they spoke about the weather.

Journey to the Moon Arc

Papda was taken to the moon by Phos to the moon to make Rutile's job easier, as that is what Phos remembers of what Padpa told them, but this ends up destroying Rutile physically and mentally.

On the Moon, Phos gives Padpa to Aechmea to repair them, using synthesized Padparadscha to fill up Padpa's holes. Aechmea repairs Padpa quite easily and quickly, surprising Phos. Padpa is also surprised at Phos's new head, and reprimands Phos for acting so brashly and betraying Kongo-sensei, but thanks them for having them fixed up and their body feels better than it ever did. Aechmea tells Padpa to take it easy for a few days as he wants to run a recovery assessment and collect data to which Padpa agrees.

Padpa then walks with Phos and Cicada to their quarters. After arriving there, Yellow Diamond is so surprised to see them awake, they fall off the ledge breaking them apart. After Yellow is put back together by the Lunarians, Padpa greets Yellow and the rest of the gems, Benitoite, Alexandrite, and Amethyst 84, who introduces Padpa to the two newer gems, Cairngorm and Goshenite (New), and finally Diamond, most of them swarm Padpa to speak with them, till Cairn says that Aechmea is coming.

Phos ropes in Padpa and Yellow in for a night raid. Padpa fends off and damages multiple Gems during the raid in order to protect themselves and Yellow Diamond. They are gravely wounded in a standoff with Cinnabar, and are coated in their Mercury.

After Phosphophyllite is revived having been trapped on Earth for 220 years, Padpa and New Goshenite take a Lunarian vessel to bring them back. Padpa sacrifices them self in order to distract Rutile. Enabling Phos to escape back to the Moon.

During the Gems first ever celebration of Kongo-Sensei's birthday, Rutile does nothing but sit on the field, with Padparadscha's body laying by their side. Before long, an army of Lunarian ships appear in the sky, and Phosphophyllite's mass invasion of the Earth begins.

After destroying most of the other gems they order a squad of Lunarian archers to fire upon seemingly indifferent Rutile, who's slouched over Padparadscha's unconscious body. It is unknown if they were both shattered into pieces, but it is safe to assume at least Rutile was.

They seem very close with Rutile, who obsessively crafts pieces to fill in Padparadscha's missing components. Padparadscha is growing concerned about how this obsession affects Rutile's health, and wants to tell them to stop working on them, but is scared on how will Rutile will take it.

Despite losing a large quantity of their memory, Phosphophyllite remembered them well and believes that they're cool. It can be assumed that in Phos' first century, they were somewhat close and admired Padparadscha. Their inactive body is taken to the moon by Phosphophyllite in the hopes that they could be repaired. They appear to be the last of the Moon Gems to still care about Phos as they travel with Goshenite to the Land in order to recover them. Upon seeing that Phos has been captured by Rutile, Padparadscha tears a chunk of synthetic padparadscha out of their chest as a distraction and Phos successfully escapes. However, it appears Phosphophyllite is indifferent to them as they command the Lunarians invading the School to, presumably, shatter Rutile and collect Padparadscha's unconscious body.

It can be assumed that at first Padparadscha trusts Kongo but has their doubts. It is unknown what Padpa thinks of Kongo now.

Padparadscha is a certain type of rare pink-colored sapphire. Sapphire in turn is a variety of the mineral corundum, a crystalline form of aluminium oxide. Corundum is a naturally transparent mineral, however impurities cause it to be dyed certain colors. Red colored corundum are known as ruby, while non-red variants are called sapphire.

Padparadscha itself is a delicate light to medium toned pink-orange to orange-pink hue, named from the Sinhalese for 'lotus blossom'. It is an extremely rare gem found in Sri Lanka, Vietnam, and parts of East Africa. The rarest of all is the totally natural variety that has no sign of artificial treatment. The name 'Padparadscha' itself is derived from the Sanskrit "padma ranga" (padma = lotus; ranga = color), a color akin to the lotus flower. 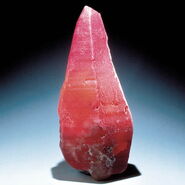 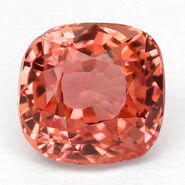 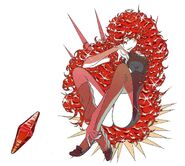 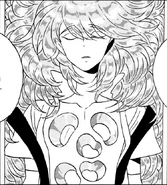 Padparadscha, inactive, in the manga 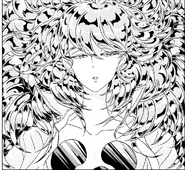 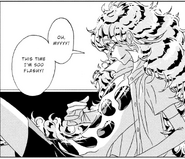 Padparadscha advises Phos to be discreet

Padparadscha after being repaired on the moon 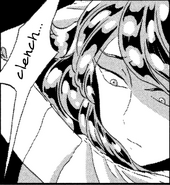 Padparadscha tears a chunk out of their chest as a distraction

Phosphophyllite orders the Lunarians to "Take care of it"

Padparadscha on the moon in chapter 95
Community content is available under CC-BY-SA unless otherwise noted.
Advertisement