View source
watch 01:32
Who is Obsidian?
Do you like this video?
Play Sound

Obsidian (オブシディアン, Obushidian) is one of the Gems. They are a minor character who is mainly in charge of weapon production.

Obsidian has a black color scheme and wears either the winter or summer uniform depending on season. They also wear the standard black shoes but no gloves nor socks. Their eyes are large and rounded with a singular, long eyelash on the sides of her eyes. Their hair is cut in a medium bob with relatively straight cut bangs which cover their eyebrows.

Obsidian is capable of melting their body in parts, creating more obsidian in the process. This is possibly how they create weapons used by the Gems. They are seen using it to create a box for Cinnabar, implying that Obsidian is immune to the mercury.

They're cheerful, energetic, and bubbly. They seem similar to Red Beryl, very dedicated to their job and will make others weapons without hesitation if requested to. As revealed in their character profiles, they are flighty and chipper, and are seen smiling very often in the manga itself.

Obsidian has so far been a minor side character who hasn't had any prominent parts of their own, occasionally being seen or taking part in activities with other Gems:

Like how other Gems treated each other, it can be assumed that they have a nice relationship with their other siblings and also like and trust Sensei.

Obsidian is a naturally occurring volcanic glass formed as an extrusive igneous rock, in other words from lava that has cooled on the surface. It is produced when felsic lava extruded from a volcano cools rapidly with minimum crystal growth. Obsidian is hard and brittle; it therefore fractures with very sharp edges, which were used in the past in cutting and piercing tools, and it has been used experimentally as surgical scalpel blades as they can be thinner than traditional steel blades.

Obsidian is mineral-like, but not a true mineral because as a glass it is not crystalline; in addition, its composition is too complex to comprise a single mineral. It is sometimes classified as a mineraloid and is considered glass. Though obsidian is usually dark in color similar to mafic rocks such as basalt, obsidian's composition is extremely felsic. Obsidian consists mainly of SiO2 (silicon dioxide), usually 70% or more. Crystalline rocks with obsidian's composition include granite and rhyolite. Because obsidian is metastable at the Earth's surface (over time the glass becomes fine-grained mineral crystals), no obsidian has been found that is older than Cretaceous age. This breakdown of obsidian is accelerated by the presence of water. Having a low water content when newly formed, typically less than 1% water by weight, obsidian becomes progressively hydrated when exposed to groundwater, forming perlite.

Pure obsidian is usually dark in appearance, though the color varies depending on the presence of impurities. Iron and magnesium typically give the obsidian a dark brown to black color. Very few samples are nearly colorless. In some stones, the inclusion of small, white, radially clustered crystals of cristobalite in the black glass produce a blotchy or snowflake pattern (snowflake obsidian). Obsidian may contain patterns of gas bubbles remaining from the lava flow, aligned along layers created as the molten rock was flowing before being cooled. These bubbles can produce interesting effects such as a golden sheen (sheen obsidian). An iridescent, rainbow-like sheen (rainbow obsidian) is caused by inclusions of magnetite nanoparticles. 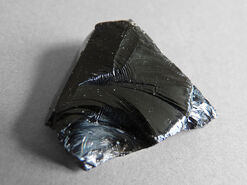 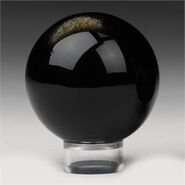 Obsidian as seen in promotional cover of the 2017 anime.

Obsidian surprised at Phos' new weapon that they obtained from the Moon. 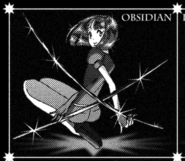 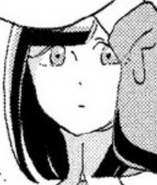 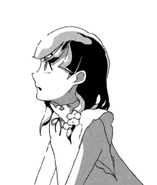 Obsidian in a celebration outfit

Obsidian alongside the other gems, partially hidden by Kongo-Sensei's cloak.