Start a Wiki
watch 01:56
Who is Neptunite?
Do you like this video?
Neptunite (ネプチュナイト, Nepuchunaito) is one of the Gems who mainly does patrol duty. They were the partner of Benitoite.

Neptunite has purplish-black color scheme and wears either the winter or summer uniform depending on season. They also wear the standard black shoes but no gloves nor socks. Their hair is very long and twin-tailed, with straight cut hair that curls slightly to their right. Their eyes are sharp and slant upwards.

They have a very sharp tongue and believe that people should face the truth head-on, regardless of how it makes them feel. This was shown when Phosphophyllite was believed to have been transformed into a slug and Diamond wanted the other Gems' help turning them back, to which Neptunite remarks that Phos never did much in the first place anyway. Other Gems comment that they are also very difficult to read in terms of both their mood and combat movements. New Morganite even remarks that not knowing what Neptunite is saying is part of their charm.

They are one of the younger Gems that are considered juniors.

Neptunite agreed with most of the Gems that the former Phosphophyllite never did anything useful, bluntly telling this to Diamond.

They seem to have a good relationship with their partner, Benitoite, although they are also very blunt and honest with them as well. It appears that Neptunite may be prone to teasing, which Benitoite is not always prepared for. Benitoite seems to feel bland and lacks personality when close to Neptunite, which is the main reason for Benitoite wanting to go with Phos to the Moon. This may indicate some tension between them. However, Neptunite later remarks that they like Benitoite, but do not worry about them.

Like how other Gems treated each other, it can be assumed that Neptunite has nice relationship with their other siblings and also likes and trusts their sensei. That haven't been seen interacting or speaking much however, so it's not very clear how Neptunite feels about the others. They seem to trust Sensei enough to remain on Earth however.

Neptunite is a mineral fairly recently discovered. With increasing manganese it forms a series with mangan-neptunite. Watatsumiite is the variety with vanadium replacing the titanium in the formula.

The mineral is named for Neptune, Roman god of the sea because of its association with aegirine from Àgir, the Scandinavian sea-god. 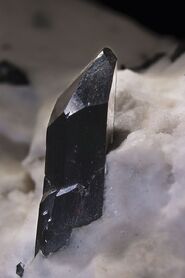 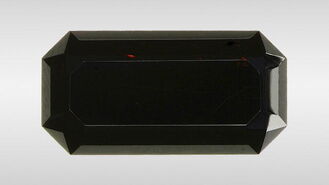 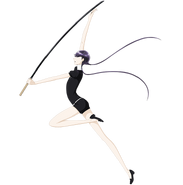 Neptunite as seen in the promotional cover of the 2017 anime. 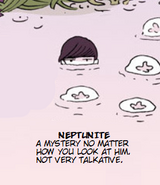 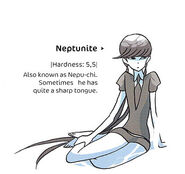 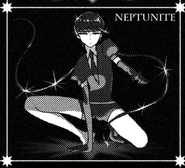 Neptunite having been recovered from the Sea presumably

Neptunite "smiling"
Add a photo to this gallery
Retrieved from "https://houseki-no-kuni.fandom.com/wiki/Neptunite?oldid=10574"
Community content is available under CC-BY-SA unless otherwise noted.