Start a Wiki
watch 02:23
Who is Morganite?
Do you like this video?

Not to be confused with New Morganite.

Morganite (モルガナイト, Moruganaito) is a Gem that does patrol duty around the The Land with their partner Goshenite.

Morganite has a pink color scheme, typically wearing black short, a white t-shirt under a black shirt, a black tie, and black shoes with a short heel. Their hair is long and voluminous, which is braided before going to sleep at night. They wear a pony-tail in the summer.

Morganite was always overconfident and brashly made decisions, such as when they went to handle a small sunspot with Goshenite without going Kongo-sensei first.[1]

According to Phosphophyllite they were violent, arrogant, and often looked down on them despite being scolded more by Sensei, but despite that they were fun to be around.[2]

Morga is first seen running in the fields with a few other gems, before noticing Phosphophyllite sleeping in the grass. Morga wakes Phos up and tells them that Sensei has been asking for them. Phos wonders if they'll be finally able to fight, but Morga replies sarcastically and is even suprised that Phos still hasn't been given a job. Goshenite is then seen rushing in reporting a small sunspot to the south, and that they should quickly run to report to Kongo-Sensei, but Morga refuses, saying that they should take care of it themselves and that they should give the eldery a break every once in a while. Morga and Goshe then go ahead to fight the Lunarians, slicing up the main vessel in half only then to discover that it's not evaporating and that arrowheads seem to be made out of Heliodor come out the vessel's body. Morga sees it as the perfect opportunity to take back every piece of Heliodor, only to have their arms and legs smashed to pieces by the Lunarians' arrows and nearly be taken away to the moon just to be saved, then reprimanded, by Kongo-Sensei.

Morga and Gosh are later seen at the school being fixed by Rutile. Phosphophyllite approaches them and asks if they can help them, but Morga quickly declines, saying that the last time Phos tried to help they switched Morga's right and left legs. Phos insists to help, but Morga still refuses, attempting to shoo Phos by asking them about their new job, but Phos says that it's a boring and useless job that benefits nobody. Rutile just then finishes fixing them and powders up Morga and Gosh, and as just as they're getting up to head to their posts, they're stopped by Phos begging to go with them only to escape their assignment and do something cool, but are quickly scorned by Morga.

Morganite passes by Phosphophyllite later to see if they made any progress only to be surprised that all the pages on Phos' notepad are empty. Morga is disgusted at how much Phos they're resisting the job, but Phos refutes such a claim, saying that they're just working on the grand scheme of things. Morga then leaves after sarcastically telling Phos to "work hard and make a great discovery o great scholar".

Morganite passes by Phosphophyllite again the very next day just to see the clipboard gone and Phos feeling down. Feeling sorry for Phos, Morga asks if they got scared from Cinnabar, but Phos snarkily replies that's not the problem, but it's the fact that their ideas can not fit on tiny pieces of paper. Morga, seeing that Phos hasn't changed, feels relief and leaves Phos alone.

Morga is later approached by Diamond for help on how to turn the slug (later to be known as Ventricosus) back into Phos. Morga at first looks horrified, but sees no problem with Phos staying as a slug, as albeit they're gross, they're well behaved and don't make trouble for others, but is quickly silenced when the slug attacks them.

Morga is later seen assisting to get the large shell in which Phos is trapped in out of the pond.

Morga prepares and participates in hibernation with the other Gems.

They are briefly seen greeting the Cairngorm, Morga beginning with "Ghost" but quickly correcting themselves.

Morga and Goshenite are taken to the moon a few years after Phos loses their head and is asleep for 102 years.

Morga, along with Antarcticite, Ghost Quartz, Goshenite, and multiple unnamed gems, are seen in Phos' dream with Lapis Lazuli's head.

It's presumed that they are one of the Gems being restored in the Gem Restoration Project lead by Barbata, but this project is cancelled.

Morga appears in another dream when Phos is being repaired by Barbata, looking down on Phos and calling them three and a half.

Phos thinks that since pink is a cute color, Morga must be cute too, but they aren't. Phos likes to nag them childishly, only to be met be teasing regarding them and their blank encyclopedia.

When Diamond took the slug (thought to be Phos) to Morga and Gosh, Morga remarked that it's gross, but at least it's well behaved and isn't causing trouble, only to end up getting attacked by the slug.

Gosh is Morganite's partner. They're good partners, but Morga often gives Gosh trouble due to their brash decisions and overconfidence

Just as most other gems, Morganite loves Kongo-Sensei.

Morganite, also known as "pink beryl", "rose beryl", "pink emerald", and "cesian (or caesian) beryl", is a rare light pink to rose-colored gem-quality variety of beryl. Orange/yellow varieties of morganite can also be found, and color banding is common. It can be routinely heat treated to remove patches of yellow and is occasionally treated by irradiation to improve its color.

Morganite’s subtle color is caused by traces of manganese. Because morganite has distinct pleochroism—pale pink and a deeper bluish pink—it’s necessary to orient the rough carefully for fashioning. Strong color in morganite is rare, and gems usually have to be large to achieve the finest color.

Morganite was named after J.P. Morgan, one of the greatest financiers in history. 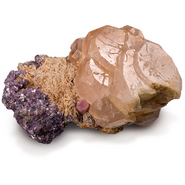 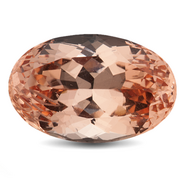 polished morganite
Add a photo to this gallery

Morganite as seen in the 2013 promotional video.

Morga and Goshe shattered by the Lunarians.

Morga playfully fighting Phos over their own shards.

Morganite on the promotional cover of the 2017 anime.

Morga in the manga. 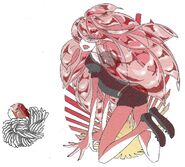 Retrieved from "https://houseki-no-kuni.fandom.com/wiki/Morganite?oldid=10800"
Community content is available under CC-BY-SA unless otherwise noted.