Start a Wiki
watch 01:24
Who is Lapis Lazuli?
Do you like this video?

Lapis Lazuli (ラピスラズリ, Rapisu Razuri) is one of the Gems. They were the head of the Library; a position now taken up by their former partner Ghost Quartz after Lapis was taken by the Lunarians. Upon being taken, only their head was able to be retrieved. This head would later on be used by Phosphophyllite.

Their character color is ultramarine blue. They have long, glossy hair which they seem to have a habit of adjusting and pushing behind their ears. Small parts of pyrite (also known as fool's gold) adorn their hair.

They have extremely keen senses, which have since been inherited by Phos.

They have a charming, leader-like personality. They have keen observation and great deductive thinking skills, and because of that have great confidence in themselves.

Euclase remarks that they were extremely smart and pleasant to talk to but were more eager to use their skills to satisfy their intellectual curiosity rather than for the benefit of others. This meant they could be quite manipulative at times. Cairngorm remarks that they could 'quietly conceal secrets for centuries' and were 'surprisingly deceiving'.

Phos once remarked how they feel calm whenever they read books, a possible trait that was inherited from Lapis.

In chapter 47, Cairngorm comments that Lapis had a habit of constantly touching their hair.

Lapis Lazuli was taken by the Lunarians before the first chapter. Before this time, they served as the librarian. Their entire body was taken with the exception of their head, kept with extreme care by Ghost Quartz and then by Cairngorm.

The aforementioned head would then go on to be the substitute for Phosphophyllite's. When their head is attached to Phos, Lapis appears in Phos' dream as an apparition of some sort. Lapis implies that this dream-like apparition is being caused by them leaving a 'message' to their inclusions to give to the next gem who hosts their head.

They explain to Phos that they also wanted to understand the Lunarians, but by trying to rationalize their illogical actions during a battle, they were shot by arrows causing them to lose their head and be taken to the Moon.

Lapis Lazuli is a deep blue semi-precious stone prized since antiquity for its intense color. It is a metamorphic rock, meaning that it is formed from the transformation of existing rock formations through heat and pressure. Lapis is not a single mineral but rather is composed of many different minerals, most notably lazurite, which makes up 25-40% of its structure. Lazurite is a silicate in the same general category as quartz, though they are both in different families. Lazurite has a blue color due to the presence of trisulfur (S3). The other notable components that may appear in lapis lazuli are calcite (white), pyrite (brass/gold), sodalite (blue), along with many other minerals.

Lapis Lazuli has been mentioned as being used as jewelry by ancient civilizations such as the Assyrians, Babylonians and Akkadians - it is even mentioned in the oldest work of literature of all time 'The Epic of Gilgamesh'. During the Renaissance era, it was powdered into the pigment 'Ultramarine', incredibly expensive at the time and highly prized. This is usually done by grounding up lapis lazuli, but it emits a foul stench.

'Lapis' is the Latin word for "stone" and 'lazuli' from the Persian word "lājavard", which is the name of the stone in Persian and also the name of a place where lapis lazuli was mined. 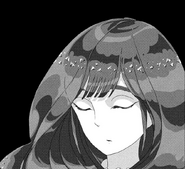 Lapis as seen in Phos' dream 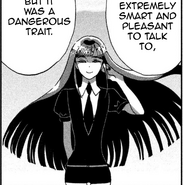 Lapis, as remembered by Euclase

Add a photo to this gallery
Retrieved from "https://houseki-no-kuni.fandom.com/wiki/Lapis_Lazuli?oldid=9962"
Community content is available under CC-BY-SA unless otherwise noted.