Start a Wiki
watch 01:29
Who is Adamant?
Do you like this video?

Kongo-sensei (金剛先生, Kongō-sensei, Literally meaning "Adamant Teacher") is the head of the Gems, acting as the teacher, protector, and father figure. He teaches the Gems about the current world and its history, and decides the role suited for each of them. He has overwhelming offensive power and can disperse the Lunarians in one blow. He becomes incredibly intimidating when angered.

Every time the Lunarians appear, one Gem from a pair of patrol will ring their school's bell. He and some (or all) of the Gems will go to the scene and disperse the Lunarians. Unlike the younger Gems, he can stay awake for a long time and doesn't require sleep, although he still rests during meditation periods, implying exhaustion. When angry, he can crack an entire building and his voice is able to shatter the weaker Gems in close range. Later, it's shown that he disperses the Lunarians by cracking his arm and using very tiny fragments of himself to attack them.

Kongo-sensei takes form of a bald, adult masculine man wearing a Buddhist monk kimono and robes. He always wears a pair of white gloves and usually sports a black cloak when going outside. He is often shown with a somber expression, frowning with his eyes closed.

He might be like the other Gems, who are covered in a white powder that imitates skin. If so, it is unknown what his true color is underneath the white powder. The volume 9 omake discusses this, where the younger Earth Gems ask what color he really is. He explains that while he cannot give out full details, he confirms that he does have some transparency. He's described as solid and heavy, as he is able to create trembles with his footsteps and crack pillars simply by dropping his head onto them when sleepy.

Normally, he is very quiet and stoic. When he speaks, he is straightforward and concise. He only rarely displays emotions, but this is rumored to be because he is deliberately hiding them and that his face would be very easy to read otherwise. On the rare occasions where he shows humor, he is still as deadpan as ever.

His composure usually only falters under two conditions: first, when Gems put themselves in harm's way carelessly, second, when he is confronted by matters from his past, such as the subject of humans. These cause him great alarm. When he is angered, he is capable of tremendous unintentional destruction, shattering weak Gems with the force of his voice alone or cracking stone floors by walking over them. These emotional expressions never last long and he very quickly reverts to his relatively expressionless face.

Otherwise, he is nonchalant and tolerant. He allows Gems without critical duties to do work on their own times, and is blasé about them prying into his past or secrets.

Kongo-sensei seems cautious using his power as to not shatter the Gems, unless he decides to scold them for making trouble or putting themselves in danger.

He cares for the Gems considerably and blames himself when they are injured or taken away by the Lunarians. Kind and wise, he becomes sad when the younger Gems are sad. He only rarely demonstrates physical affection, such as hugging Antarcticite or patting other Gems on the head. For unknown reasons, he didn't tell the younger Gems about 'humans' and avoids any mentioning of them, instead vaguely referring to humans as an 'ancient species'.

He does not appear to sleep often, but his wakefulness takes a toll on him. He has a set period in a day where he goes under deep sleep-like meditation and becomes virtually impossible to wake. According to Jade, waking up sensei from this "nap" period is more of a struggle than fighting the Lunarians, as demonstrated by the Gem shouting and even smacking at their sensei in a futile attempt to wake him. Despite that, it is implied that he can be awakened from this state, as he once chastised the Gems for not doing so when the school was attacked by the Lunarians. During that same incident, he had drifted from meditation into sleep and starting dreaming, something which he considered reckless upon waking.

He is hinted to be very lonely.

The Gems love and trust him, and most of them obey him. Sensei, in turn, loves and cares deeply for all of them. As well as being their leader and mentor, he also fills the role of parental figure for the Gems. He shows affection occasionally as if they were his own children - patting Gems on the head, letting them crawl on him, picking them up, and embracing them, among other things. He still shows a lot of discipline towards them, as the Gems are incredibly fearful of him if he becomes upset at them doing something wrong. Considering it was said that Phos is the only one to get away with saying such things to Sensei, it's assumed that he usually doesn't tolerate back-talk or sass.

The Gems have always had a inkling that Kongo-sensei has a connection to the Lunarians but according to Cinnabar they never discuss it openly and the Gems simply decided to trust him entirely. He also trusts them back as when Phos, the only one who can talk to Ventricosus' small form, told him that they could communicate with it and he believed them. He's happy when the Gems are happy, and upset when they're in trouble. The Gems that disobeyed him and ended up breaking themselves usually get yelled at, making them more broken.

Sensei has treated Phos like the rest of the Gems, in teaching them and showing them affection and leadership. He seems to give Phos a bit of lax in terms of Phos talking back for some reason, and it's not really explained. Even so, there are limits to how much he will tolerate Phos's disobedience and is not afraid to discipline them like with the others if pushed too far. An example being that when Phos was brought back to the school after secretly going to the ocean, despite being ordered not to, Sensei was furious with them for both disobeying his orders as well as putting themselves in danger, to the point he scolded them with his infamously powerful voice.

He has attempted to give them a job, continuously denying them patrol duty, their first job being writing encyclopedia entries. He is willing to give them patrol duty afterwards, showing more trust in Phos and allows Antarcticite and Phos to work together during the winter. He has never blamed Phos for any of the Gems around Phos being taken to the Moon, and has attempted to comfort them. Even when Phos began showing doubts towards him, he still treated them with respect and affection. Sensei and Phos's relationship is best described as a parent and child one, wanting nothing more than the Gem's safety rather than prying for details. Even after Phos has taken other Gems to the Moon with them, Sensei still does not talk negatively about Phos, telling the remaining Gems that it is understandable that Phos would have doubts in him with the secrets that he's maintained. Sensei never attacks Phos, and attempts to secretly repair them after the Gems have shattered them.

He let Phosphophyllite cling and hide underneath his robe. When Phos was lost in the sea, he was glad to get them back. He understands Phos' loss about Antarcticite and kindly guided them during the rest of winter. While Phos loves him too, Phos starts to doubt him after accidentally hear him calling the unusual Moon Person a name. When Phos found out that he has been using tiny pieces of himself to attack the Lunarians, he asked Phos to keep it a secret.

Sensei mentions he regrets Cinnabar's condition and how he feels like he's essentially locked them in the night away from the other Gems. He eventually tells Cinnabar that they're worth just being alive, when the latter was struggling with their body. Cinnabar themselves dodged Phos' question and said they're still observing him.

He welcomed Ventricosus, the ruler of the shell, as he thinks the shell is also another kind of gem.

Lunarians have never been seen attacking Sensei, rather they worship him and present him with gifts. This isn't fully explained until Aechmea explains that they are attempting to appease Sensei. The Lunarians are the spirits of humans who were not purified by prayer before the impact destroyed humans, so are essentially stuck in limbo as Western audiences may associate it with. This prevents them from moving on into becoming nothingness, trapping them in suffering and "angst". Sensei was the prayer machine meant to help spirits like them move on, but he hasn't done so because of either being broken or other restraints (such as morality) stopping him. Aechmea explains that at first, Lunarians showered him with gifts and praise, vowing to do anything for him to pray. The Lunarians attempt to persuade Gems to help them, but the Gems break themselves before any cooperation can be met. The Lunarians then took the Gems hostage and ground them to fine dust to cover their Moon, Aechmea explaining that it would allow Sensei to see what he has caused.

Chapter 80 reveals that the reason why he had stopped praying for the Lunarians was because doing so would destroy not only the Lunarians, but the Gems and Admirabilis as well.

Sensei has shown aggression at the mention of humans, showing that there is tension between him and the former species. This isn't explained however, but Lunarians being one of the closest members of the pieces of humans shows a hint of what it may be. The only specific human mentioned is the Doctor, the one who created him. He does give brief passing comments on humans occasionally, such as crying being a fault of them. It's assumed he sees humans as sinful and impure, full of negative traits, especially compared to the Gems he cares for now.

The kanji used in Kongo (金剛) is derived from the Buddhist term Vajra, which means both "diamond" and "thunderbolt". A vajra is a symbol representing a force that is both indestructible and able to cut any substance (hence diamond), as well as unstoppable (hence thunderbolt). A vajra is often represented by a mace used by the Hindu god Indra.

"Adamant" seems to be a fan translation of Kongo. Adamant is a term used to refer to any especially hard, unyielding substance, whether composed of gemstone or some type of metal. Both adamant and diamond derive from the Greek word αδαμαστος (adamastos), meaning "untameable". Adamantite and adamantium (a metallic name derived from the Neo-Latin ending -ium) are also common variants. In the past, the term "adamant" has been used to refer to very hard materials such as diamonds. Today, adamant is often used in literature and other works of fiction to refer to a fictional substance that is unbreakable.

Although Kongo-sensei is not a true Gem and is in fact a machine created by humans, he still has a diamond like outer shell. 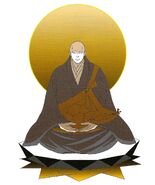 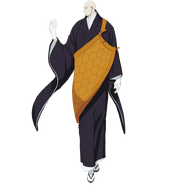 Appearance in the Manga 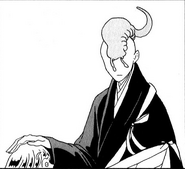 Add a photo to this gallery
Retrieved from "https://houseki-no-kuni.fandom.com/wiki/Kongo?oldid=10877"
Community content is available under CC-BY-SA unless otherwise noted.