Jade (ジェード, Jēdo) is one of the Gems who mainly works as Kongo-sensei's spokesperson. They've been nicknamed the 'Chairman' (議長, Gichō) by the other Gems.

They're the second place when it comes to being hard to break.

Jade has dark green color scheme and wears either the winter or summer uniform depending on the season. They also wear standard black shoes and gray knee-high socks. Their hair is long and tied on the back like a ribbon.

They are a very serious person. In the manga, their character profile shows them sitting in a formal Seiza position with legs tucked underneath. In the anime, they are portrayed more playfully and with humor.

Rutile tapped them with hammer without their permission and called them 'The Unmovable Jade/堅牢のジェード'. The other Gems sometimes called them 'Chairman/議長/Gichou'.

Jade thinks Phosphophyllite is 'always getting in everyone's way'. They felt responsible for Phos becoming a slug, but since they couldn't do anything, they left them to Rutile.

Kongo-sensei personally asked Jade to inform them if anything happen during their "meditation" in the Inner Temple. Jade told Euclase that waking sensei up is more of a struggle than fighting the Lunarians. It appears that Jade is used to waking up sensei, as Euclase commented that they never fail to wake him up.

Like how other Gems treat each other, it can be assumed that Jade has nice relationship with their other siblings and also likes and trust their sensei.

Jade is an ornamental rock. Two different gem materials, Jadeite and Nephrite, can correctly be called jade. Both are actually metamorphic rocks made up of tiny interlocking mineral crystals. These interlocking crystals make both gems exceptionally tough.

Jadeite comes in a wide range of attractive colors: Many shades of green, yellow, and reddish orange, plus white, gray, black, brown, and lavender (often a light purple or light grayish violet color). The coloration is often streaked or mottled, giving jadeite gemstones an interesting visual texture that carvers can use to create imaginative and intriguing effects.

Nephrite is also accepted as jade in the international gem and jewelry industry. It ranges from translucent to opaque and can be light to dark green, yellow, brown, black, gray, or white. Its colors tend to be more muted than jadeite’s, and they’re often mottled or streaked.

The English word jade is derived (via French l'ejade and Latin ilia "flanks, kidney area") from the Spanish term piedra de ijada (first recorded in 1565) or "loin stone", from its reputed efficacy in curing ailments of the loins and kidneys. Nephrite is derived from lapis nephriticus, the Latin version of the Spanish piedra de ijada.

Confucius the philosopher wrote that jade is like virtue and its brightness represents heaven. The traditional jade flat disc with a hole in the middle, known as a “bi,” symbolizes heaven. 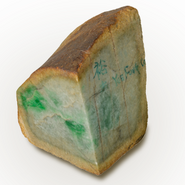 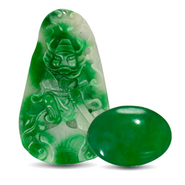 polished jade
Add a photo to this gallery
Jade is the official gem for the 12th anniversary. 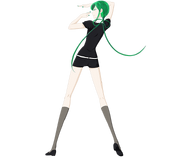 Jade as seen in the promo cover of the 2017 anime.

Jade in the manga

Art from the volume 4 special edition playing cards
Add a photo to this gallery
Retrieved from "https://houseki-no-kuni.fandom.com/wiki/Jade?oldid=10553"
Community content is available under CC-BY-SA unless otherwise noted.