Houseki no Kuni (Japanese: 宝石の国, lit. "Country of Jewels") is a Japanese action fantasy seinen comic series written and illustrated by Haruko Ichikawa, starting in 2012. It is published by Kodansha on Monthly Afternoon magazine and ten volumes compiling the chapters have been released so far. An animation promotional video was released on July 2013, and a 12 episode anime series began airing in the fall of 2017, and ended on the 23rd of December.

In a mysterious future timeline, a new life form called Houseki (Gems) inhabit a world destroyed by six meteors, leaving only a beach surrounded by ocean. The 28 active Gems must fight back against the deadly Lunarians who seek to turn the Gems into decorations. All Gems are assigned a specific role to play in their community, such as fighter, medic, weapon-smith, etc. Though they hope to fight the Lunarians, Phosphophyllite, or Phos, is a Gem who is given no assignment due to their lack of any skills until the leader of the Gems, Kongo, asks them to make a natural history encyclopedia. Phos attempts to find a more exciting job than their currently assigned one, but ends up getting in over their head.

An anime promotional video was released on July 2013.

A twelve-episode anime series aired between October and December 2017. It is a 3D CG based anime produced by Studio Orange and covers most of the events up to chapter 36 of the manga. 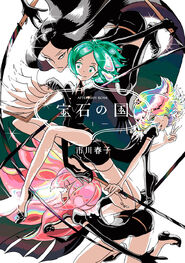 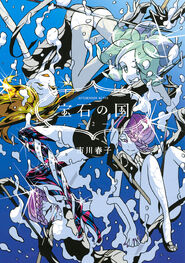 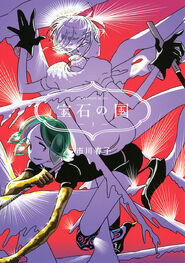 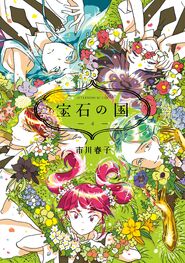 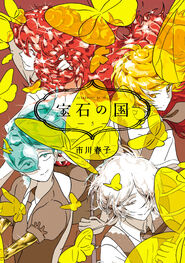 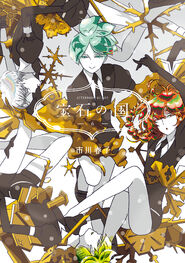 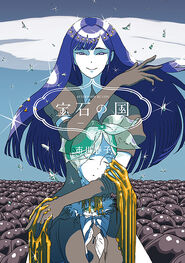 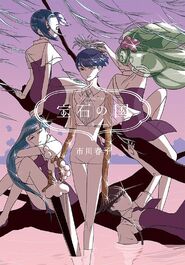 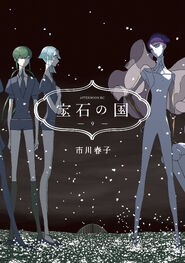 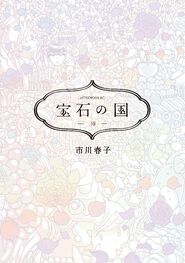 Volume 10
Add a photo to this gallery

Volume 10
Add a photo to this gallery

2018 December Issue , Chapter 72
Add a photo to this gallery

Algernon Product Postcard Set
Add a photo to this gallery

Super Groupies Ring
Add a photo to this gallery

an official figurine of Phos 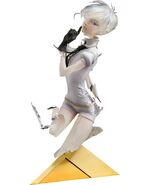 an official figurine of Antarc
Add a photo to this gallery
Retrieved from "https://houseki-no-kuni.fandom.com/wiki/Houseki_no_Kuni_(Manga)?oldid=10779"
Community content is available under CC-BY-SA unless otherwise noted.