Start a Wiki
watch 01:15
Who is Hemimorphite?
Do you like this video?
A Gem who has only appeared briefly.

They're shown to have patrol duty, and are partners with Watermelon Tourmaline.

They have powder-blue colored feature and wear winter or summer uniform depending on the season. They also wear standard black shoes but no gloves nor socks. Their hair is long and swept over their right shoulder.

They have been shown to have a kind and playful personality.

Hemimorphite has been a background character with little to no significant scenes of their own. They are occasionally seen doing activities along with the other Gems. Hemimorphite was among the Gems that Diamond sought for help when Phosphophyllite was believed to have turned into a slug. Hemimorphite was seen with the other Gems pulling the slug's shell from the pond, collecting Phosphophyllite's fragments, and later searching for them when they were lost in the sea. They also joined the other Gems in winter hibernation and collecting parts of Shiro.

When Phos was believed to have turned into a slug, Hemimorphite believed that it was better this way as the Lunarians would not kidnap them and would leave them alone.

Like how other Gems treated each other, it can be assumed that they have a nice relationship with their other siblings.

Hemimorphite is a component of calamine. It's a sorosilicate mineral which has been historically mined from the upper parts of zinc and lead ores, chiefly associated with smithsonite (ZnCO3). They were assumed to be the same mineral and both were classed under the same name of calamine.

The name of the crystal comes from the term hemimorph, used to describe crystals whose two ends are asymmetrical.

Hemimorphite alongside the others Gems. (Beside Dia)

Hemi talking to Sphene and Peridot

Hemimorphite in one of the intro pages 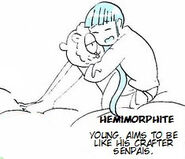 Hemimorphite (intro) with a Shiro
Add a photo to this gallery
Retrieved from "https://houseki-no-kuni.fandom.com/wiki/Hemimorphite?oldid=9957"
Community content is available under CC-BY-SA unless otherwise noted.