Start a Wiki
watch 01:12
Who is Goshenite?
Do you like this video?

NOTE: This article contains spoilers! Read with caution.
Not to be confused with New Goshenite.

Goshenite (ゴーシェナイト, 'Gōshenaito) is one of the Gems who mainly does patrol duty. They tend to follow their partner Morganite, even though sometimes they are too reckless.

Goshe has silver-white color scheme and wears either the winter or summer uniform depending on the season. Their hair is shorter on their left side before becoming almost chin length on the other, the impression being their hair is being swept to the right. Their bangs often cover their right eye, although it is still visible.

They're very kind and gentle. While their partner tends to tease Phosphophyllite, they usually treat them with kindness instead. Despite this, they lend Phos their blade on one occasion, only in an attempt to inform them of the dangers of fighting.

Goshe generously helped Phos with their work, though only goes as far as giving suggestions. Yet when Diamond took Phos the slug to Morga and Goshe, Goshe said that Phos the slug looks happy enough (to be slug). Like Morga, Goshe seems to have an older sibling relationship to Phos and occasionally teases them.

Being partners, Goshe and Morga seem to have a good harmonious enough relationship to work together as they assist each other in battle. Morga seems to be the more dominant personality however, in which Goshe generally agrees to do what Morga says.

Like how other Gems treated each other, it can be assumed that Goshenite has nice relationship with their other siblings and also likes and trusts their sensei.

Colorless beryl is called goshenite. The name originates from Goshen, Massachusetts, where it was originally discovered. Since all these color varieties are caused by impurities and pure beryl is colorless, it might be tempting to assume that goshenite is the purest variety of beryl. However, there are several elements that can act as inhibitors to color in beryl and so this assumption may not always be true.

The name goshenite has been said to be on its way to extinction and yet it is still commonly used in the gemstone markets. Goshenite is found to some extent in almost all beryl localities. In the past, goshenite was used for manufacturing eyeglasses and lenses owing to its transparency. Nowadays, it is most commonly used for gemstone purposes and also considered as a source of beryllium. 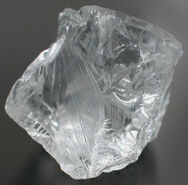 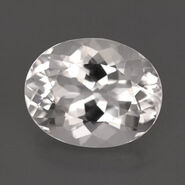 polished goshenite
Add a photo to this gallery 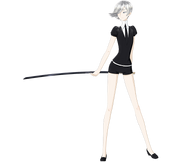 Goshenite as seen in the promotional cover of the 2017 anime. 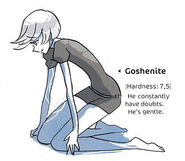 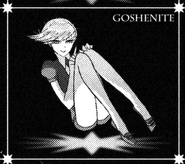 Add a photo to this gallery
Retrieved from "https://houseki-no-kuni.fandom.com/wiki/Goshenite?oldid=10891"
Community content is available under CC-BY-SA unless otherwise noted.