Start a Wiki
watch 01:13
Who is Ghost Quartz?
Do you like this video?

Ghost Quartz is one of the Gems, they work as a librarian and take part in patrol duty. They are also in charge of the long-term recovery facilities located on the fourth floor (third floor in the anime).

Ghost has a white color scheme and wears either a winter or summer uniform depending on the season. They also wear standard black shoes and bobby socks, but no gloves. Their hair is short with a side-part that covers their left eye. There are two long locks of hair on either side of their head that reach down to their thighs.

Ghost's weapon of choice is a scythe.

Quiet and calm, Ghost is very insecure about themselves, thinking that their fallen partner, Lapis, was much better than them. Ghost was born with a multi-layered structure, meaning that two personalities inhabit their body, the other later being named Cairngorm, who is very different from Ghost. Ghost describes the other personality as violent and brash, but they both equally respected and followed Lapis.

Ghost's former partner. Ghost speaks of Lapis Lazuli in high regards, referring to them as smart and organized. Ghost also maintains the library as if Lapis Lazuli will return soon. The library was put into Ghost's responsibility after Lapis was taken by The Lunarians -- leaving only their head. Although Ghost speaks highly of Lapis, it's unsure if it was a healthy relationship as it is learned later that Lapis was also clever and manipulative. It's unknown if Lapis treated Ghost this way, but Lapis did seem to place a lot of trust into Ghost. Ghost does say that "We both [Ghost and Cairngorm] live by Lapis' instructions." so it's most likely an unbalanced relationship in which Ghost idolizes them too much. It's unsure if Ghost or Cairngorm idolizes them, but it seems to be a driving force overall for the one being.

Ghost's most recent external partner. Ghost appears to respect Phos, even thanking them for placing in the effort of stretching out their hand to save Ghost. Ghost however, seems to project Lapis onto Phos to fill a vacant spot for them in their life, seeming to want to follow Phos's orders without question as Ghost did presumably to Lapis. Ghost is willing to sacrifice themselves for Phos's safety, which ends up being the reason Ghost is taken to the Moon.

Ghost has a deep and complex relationship with Cairngorm, the Gem they formed over and share a body with. It's unsure of how exactly they feel about each other, and who controls which aspect of Ghost's outwardly behaviour. They refer to Cairngorm as the "little one inside me", and speaking of Cairngorm in a soft way. In Ghost's final moments, it's given a clearer picture of Ghost's attitude towards Cairngorm, calling them rude, violent, selfish, and annoying. They also think that Lapis's abduction is Cairngorm's fault at times, and they are seen telling Cairngorm to "not act up today" hinting that Cairngorm can act in a counterproductive way. Ghost does admit that they still care for Cairngorm however, and that they can be dependable at times, and entrusts Cairngorm to protect Phos when they're gone. Cairngorm appears to be incredibly upset over Ghost's abduction, so their relationship is probably similar to a sibling one. While having animosity towards each other, they still care for each other. That seems to be placed at a turn as it's revealed that a part of Ghost still exists in Cairngorm's eyes, Aechmea telling Cairngorm that they are still being controlled by Ghost (although whether this is true or not is still unknown).

Phantom quartz is a variety of quartz, or "rock crystal", that forms over pre-existing crystals. The included crystal is visible due to some variation in composition making the boundary of the included crystal visible. Such crystals display the outlines of numerous smaller crystals, known as phantoms.

Ghost Quartz in the manga. 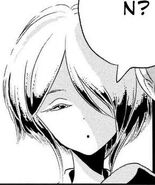 Ghost Quartz alongside the others Gems (seen to the right of Kongo-sensei behind Euclase and Peridot).

Ghost being chipped away from Cairngorm. 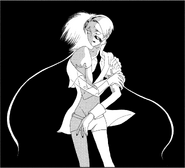 A "phantom"-like projection of ghost quartz

Ghost, speaking of Cairngorm, to Phos when approved to fight with Phos 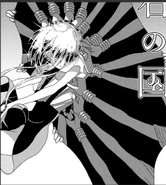 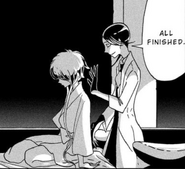 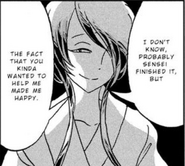 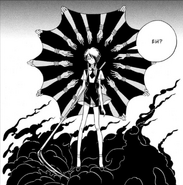 Retrieved from "https://houseki-no-kuni.fandom.com/wiki/Ghost_Quartz?oldid=10212"
Community content is available under CC-BY-SA unless otherwise noted.