Start a Wiki
watch 01:20
Who is Euclase?
Do you like this video?

Euclase (ユークレース, Yūkurēsu) is one of the Gems who does patrol duty, secretary work, strategy planning, and other odd jobs. One of the elder gems.

Euclase has a white and blue color scheme and wears the winter or summer uniform depending on the season. They also wear standard black shoes but no gloves or socks. Their hair is cut short with blue on one side and white on the other (The colors seems to be able to switch sides). They also have thick eyebrows.

Euclase takes their job as a secretary seriously. Despite this, they are kind and caring to all of their siblings, including Phosphophyllite. They were the first to rush into action when Phos was swallowed by a giant slug that invaded the school. It seems like they know their limits and will not do anything unnecessary if it's not the best course of action. They play along with Phos' jokes and have a strong sense of responsibility.

They are shown to be quite perceptive, being one of the first to notice Phos' strange behavior after they returned from the Moon. But are also partial to reasoning over violence.

During an omake (bonus chapter), four of the Gems are shown playing cards during the night. Morganite and Phos team together against Diamond and Euclase, who the former calls "Team Eyebrows". Diamond and Euclase end up winning, causing Phos to accuse Euclase of cheating and demanding that they switch teammate. Diamond partners with Bort instead and still manages to win. So instead, Euclase partners with Jade, and again still manages to win. Finally, Phos decides to partner with Kongo-sensei...

Euclase acts as an older sibling type towards Phos, showing them kindness and patience. They display a certain level of assertiveness however, which becomes more apparent after Phos's first return from the Moon. During Phos's second return, they emerge as the violence is seemingly ended to approach Phos, speaking to them directly and saying "This isn't what you wanted, was it.". However, their level of kindness and patience reveals itself to be prevalent when Phos returns the third time, this time by themselves. Euclase is one of the only ones who are willing to give Phos a chance to speak to Sensei while the other Gems are quick to shatter Phos. Even after Phos is shattered, Euclase seems to be greatly affected and in shock. They however, pick up on Phos's request to get Sensei to pray, and carry on that request after Phos's pieces are buried for 220 years.

Though it hasn't been officially mentioned, Euclase seems to be partnered with Jade as the two are constantly seen together. Their jobs also seem to compliment each other, being a secretary and speaker respectively. They have not been seen fighting together on patrol duty as other Gems have though. Euclase and Jade have one of the healthiest partnership among the Gems, respecting each other and seeming to have a mutual understanding and communication. They have not been seen belittling each other.

Euclase has a high level of respect and loyalty towards Sensei, being one of the first ones to tell Phos that they do not wish to go to the Moon and that they want to stay with Sensei. They are also the first to speak up to amend things with Sensei after he reveals his true identity, wishing to "start over" with a mutual understanding and respect.

Euclase is a beryllium aluminium hydroxide silicate mineral. It crystallizes in the monoclinic crystal system and is typically massive to fibrous as well as in slender prismatic crystals. It is related to beryl (Be3Al2Si6O18) and other beryllium minerals. It is a product of the decomposition of beryl in pegmatites.

Euclase crystals are noted for their blue color, ranging from very pale to dark blue. The mineral may also be colorless, white, or light green. Cleavage is perfect, parallel to the clinopinacoid, and this suggested to René Just Haüy the name euclase, from the Greek εὖ, easily, and κλάσις, fracture. The ready cleavage renders the crystals fragile with a tendency to chip, and thus detracts from its use for personal ornament. When cut it resembles certain kinds of beryl and topaz, from which it may be distinguished by its specific gravity (3.1). Its hardness (7.5) is similar to beryl (7.5 - 8), and a bit less than that of topaz (8). 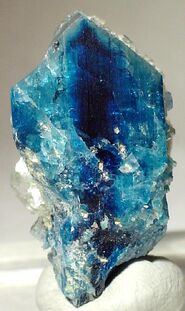 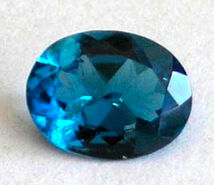 Polished euclase
Add a photo to this gallery

Euclase as seen in the 2013 OVA. Note the different sides of their hair colors. 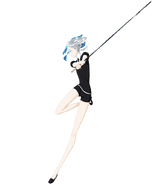 Euclase in the promotional cover of the 2017 anime.

Euclase in the manga

Euclase in their summer uniform 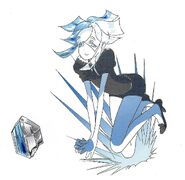 Intro blurb (with flower in hair) 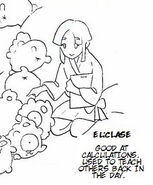 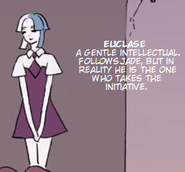 Euclase being awoken from hibernation

Add a photo to this gallery
Retrieved from "https://houseki-no-kuni.fandom.com/wiki/Euclase?oldid=10550"
Community content is available under CC-BY-SA unless otherwise noted.