Start a Wiki
watch 01:11
Who is Diamond?
Do you like this video?
Diamond (ダイヤモンド, Daiyamondo), also called Dia, is one of the Gems who mainly does patrol duty. Despite their high offensive power, their toughness is second rate and they're easily broken. The other Gems consider them lovely and a top fashion model.

Dia has a clear, colorless scheme yet their gem's characteristic gives them a high light dispersion, thus creating rainbow reflections. They are very sparkly and blinding. They even sparkle and glow even during the night, though they seem to be able to turn this off. Their hair is a short medium bob, their eyebrows are thick and their eyelashes are long.

On Earth, they wore either a winter or summer uniform depending on the season. They also wore standard black shoes with ribbons, and white long gloves with white thigh-high socks.

On the Moon, they wear extravagant outfits that often resemble dresses with puffy skirts.

Diamond is initially very friendly, kind, and gentle. They appear to be calm during battle, even when their situation isn't good. However, they are actually insecure and frustrated with their current body which, though being the hardest, shatters easily. Dia wishes to change this. Dia dislikes being compared to Bort although they admire their younger sibling a lot.

They are perceptive regarding Gems' inner feelings and relationships, though Cinnabar accuses them of seeing everything as some kind of romance. Despite their more gentle nature, they're very stubborn and tend to be selfless and fearless in battle. From Bort's point of view, Dia is always wandering around.

Dia is shown in later chapters to be able to display hostility and a large ego.

Diamond seems to spoil Phosphophyllite. They listen to them patiently and cares for them when they're sulking. When their blade was thrown and their arm broken, Diamond threw Phos and told them to run. It seemed because Phos tried to save Diamond's arm and got eaten, Diamond decided to look a way to bring Phos back. When they heard that Phos' plea to go to ocean got rejected, Dia planned to persuade theirSensei again together with Phos. Dia also accepted and was very understanding about Bort and Phos being teammates, and asked Phos to take care of the little one (Bort), though later they said it was so frustrating (for them). Though Dia thinks Bort is eccentric, they became upset when Phos talked badly about Bort. Along with most other gems, Dia's concern for Phos diminished after going to the moon, most likely because of their new status as a pop idol.

Their relationship with Bort is complicated: they admire and love Bort but also envy and resent them, and hopes one day to be separated from them in any way, since Bort is always getting stronger yet Diamond still feels useless in a fight despite their highest hardness. Bort thinks of Diamond's insecurities as mindless thoughts and always yells at them for their reckless and inefficient battle style, but Diamond is too stubborn to listen to them even though they know Bort is right. They once said to Phos that Bort is the real diamond. Bort sometimes calls Diamond 'Niichan'.

The other gems know about Bort and Diamond's strength situation and are kind enough to not mention it in front of Diamond. They also seem accustomed to hear them saying or doing odd things.

When apart from Bort on the Moon, Dia seems to display fear at the mention of Bort, signifying that there was more hostility in treatment from Bort towards Dia and Dia's feelings towards Bort. Phos eventually uses this to take advantage of Dia in threatening to bring Bort to the Moon so that Dia complies in assisting with destroying the Earth Gems. Dia mentions that they would like to turn that "little nuisance (Bort) into dust".

Maybe because they were 'born' in the same year, Dia is more friendly to Cinnabar and wasn't afraid being near them. They can see what Cinnabar means between words much to Cinnabar's annoyance. Diamond says that Cinnabar talks about Phos more than they talked during the last century. They also like to tease them about their 'crush' on Phos.

Morganite and Phosphophyllite once played a game against Diamond and Euclase and called them 'Team Eyebrows. Morga was also one of the gems Dia asked for help in regards of Phos turning into a slug.

Euclase and Diamond played a game of cards against Morganite and Phosphophyllite.

Diamond (from the ancient Greek ἀδάμας – adámas, meaning "unbreakable", "proper", or "unalterable") is one of the best-known and most sought-after gemstones. Diamond is the only gem made of a single element: It is typically about 99.95 percent carbon. The other 0.05 percent can include one or more trace elements, which are atoms that aren't part of the diamond’s essential chemistry. Some trace elements can influence its color or crystal shape. The hardness of diamond and its high dispersion of light – giving the diamond its characteristic "fire" – make it useful for industrial applications and desirable as jewelry.

It forms under high temperature and pressure conditions that exist only within a specific depth range (about 100 miles) beneath the earth’s surface. Diamond’s crystal structure is isometric, which means the carbon atoms are bonded in essentially the same way in all directions.

Perhaps the most famous use of the diamond in jewelry is in engagement rings, which became popular in the early to mid 20th century due to an advertising campaign by the De Beers company, though diamond rings have been used to symbolize engagements since at least the 15th century. 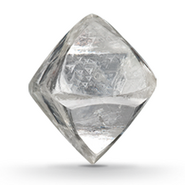 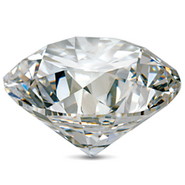 polished diamond
Add a photo to this gallery
Diamond is the birthstone for April. Colorless diamond is also the gem that marks the 60th and 75th wedding anniversaries. 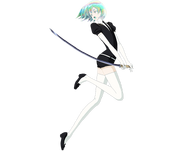 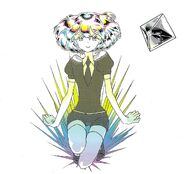 Dia in one of their performance outfits

Dia on stage as a pop idol 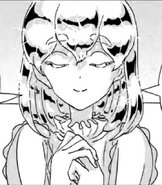 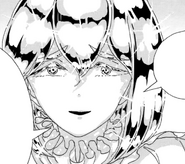 One of Dia's Moon outfits

Dia displaying hostility
Add a photo to this gallery
Retrieved from "https://houseki-no-kuni.fandom.com/wiki/Diamond?oldid=11129"
Community content is available under CC-BY-SA unless otherwise noted.