watch 01:05
Who is Cinnabar?
Do you like this video?
Play Sound

Avery Smithhart
Cinnabar (シンシャ, Shinsha) is the only Gem who goes on night patrol. Due to their body producing a poison (Mercury) which is harmful to Gems and living things, they are isolated and ashamed of themselves. They hate fighting and hate to be seen.

According to Rutile, Cinnabar has an extraordinary amount of talent and combat ability, but is too much to handle due to their uncontrollable poison that ruins everything it touches. Cinnabar's silver poison gathers faint light at night, which keeps them awake and aware while night patrolling. According to Kongo-sensei, the night patrol is something Cinnabar came up with by themselves.

They used to spend their time during the day in Hollow Cape waiting for the Lunarians to take them since they thought they may at least be of use to them. They are knowledgeable about things other Gems don't know and was recommended by the Gems for Phosphophyllite's work on the encyclopedia.

After accidentally hearing their secret and wish, Phos promises to help Cinnabar find a job more suited to them than night patrol, "a fun job only they can do".

They have a red color scheme and wear the winter uniform year-round. They wear black oxfords and sometimes black gloves when touching something, but no socks. They have a medium length, asymmetrical haircut with a longer section that hangs in front of their face. They have a cowlick in the anime.

Cinnabar is gloomy and hates themself for dirtying the things around them with their poison, though they are outwardly aggressive and dispassionate towards others. According to Kongo-sensei, Cinnabar is far too wise and too kind to be alone. Although they try not to show it, they have a tiny sliver of hope that Phos will be able to fulfill their promise. They are depicted as being intelligent and mindful of things, able to provide Phos with some information they needed for their encyclopedia.

Cinnabar also seems to have a form of social anxiety, as in Chapter 65, they have a hard time talking to Kongo-sensei as well as their fellow gems.

When encountering Phos each time, they seem doubtful of their words and outwardly annoyed with them, even going so far as to run away at one point. But they are the only gem they regularly speak to, with even Diamond only coming by sporadically.

After the 220-year time skip, Cinnabar is shown to be much happier and returned to live at the school, though they still find it difficult to talk with others. They seem to have a close bond with Bort.

Cinnabar is able to pull out mercury from them to use for different reasons, mainly for battle. The mercury seems to be abundant and a constant supply of it is available to them. They are able to manipulate it in the air and from a distance, and some small droplets of it constantly hover around Cinnabar. They seem to not be in complete control of the mercury, and sometimes release it without wanting to. The mercury also allows them to stay up during the night due to its reflective properties shining light.

The mercury is called "liquid poison" by the other characters within the series. It's known to damage both organic life and the Gems. Often with spills, the area becomes inhabitable for a long time afterwards, often looking dead after later observation. In terms of the Gems, the mercury is known to damage surfaces it is exposed to and causes light to be blocked from reaching those parts, requiring the pieces to be removed. Current known Gems who have been damaged by their mercury are: Phosphophyllite, Bort, and Padparadscha.

Whose room is beside theirs, says they can't relax near them. Generally, the Gems all know that they tend to not bother others, but their own existence itself is harmful so they can't help but avoid them.

Dia is friendly to Cinnabar as they were born in the same year and also because of their personality; they can see what Cinnabar means between words, much to their annoyance. Diamond says that Cinnabar's comment about Phos is more than what they said in the last century. To Cinnabar, Diamond is kind of weird.

Cinnabar first said they envied Phosphophyllite since the latter is wanted by the Lunarians. They want to leave the night duty so when Phos promised they will find Cinnabar a job suited for them, they can't help but feel a little hopeful. Cinnabar saves Phos multiple times, making Phos determined to help them back. They picked up Phos' notepad, but did not give it back to them yet. Though they agreed that Phos is useless and a disappointment, they always remember Phos promise and has held off on labeling them as a liar. Phos themselves is kind of happy to be depended on, as both actually are weak and not useful for their society.

When asked by Phos whether they trust sensei or not, Cinnabar replies that they are still observing. On the contrary, Kongo-sensei cares for them, telling them that they're worth something just by being alive, though they still can't find the best solution for them. Due to recent developments, Cinnabar is less reliant on Phos getting them a job, but reveals to Phos that it is ultimately because of Phos that they were able to be with the other Gems and they are thankful for it.

Cinnabar and cinnabarite, likely deriving from the Greek κινναβαρι (kinnabari), refer to the common bright scarlet to brick-red form of mercury(II) sulfide, that is the most common source ore for refining elemental mercury, and is the historical source for the brilliant red or scarlet pigment termed vermilion and associated red mercury pigments.

Cinnabar has been used for its color since antiquity in the Near East, including as a rouge-type cosmetic, in the New World since the Olmec culture, and in China since as early as the Song dynasty, where it was used in coloring lacquer-ware. Associated modern precautions for use and handling of cinnabar arise from the toxicity of the mercury component, which was recognized as early as ancient Rome.

polished cinnabar
Add a photo to this gallery

"To think they'd be on higher level than me, a gem useless since birth. How impressive..!" - Phosphophyllite, about Cinnabar.

"Someone like you, who is beloved even on the moon.. couldn't understand what it feels like to be lonely." - Cinnabar, to Phos 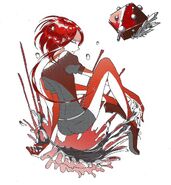 Cinnabar in the manga

Cinnabar's control of their toxins in the manga 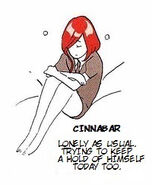 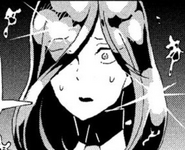 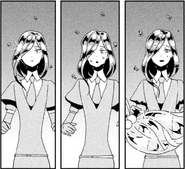 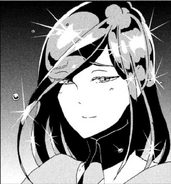 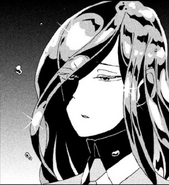 Add a photo to this gallery
Retrieved from "https://houseki-no-kuni.fandom.com/wiki/Cinnabar?oldid=12541"
Community content is available under CC-BY-SA unless otherwise noted.