Start a Wiki
watch 01:22
Who is Cairnogorm?
Do you like this video?

The other Gems
Aechmea ('Husband')

Cairngorm (カンゴーム, lit Kangōmu) is a Gem who appears midway in the story and is one of the gems who accompanied Phosphophyllite to the moon, though reluctantly. They used to be the inner shell of Ghost Quartz, who has a multilayered structure and thus two personalities. After Ghost Quartz was taken to the moon, they became active in their stead.

When Cairngorm was first introduced, their "skin" was dark and they remained so for some time in order to better feed on sunlight due to their inclusions being fickle. However, shortly after, they applied powder to their skin much like the other Gems. They wore a winter uniform, bobby socks, and a pair of black tassel loafers. They have a very short haircut that was noted to resemble Antarcticite, though Cairngorm is more combed.

Their weapon was the same sickle that had belonged to Ghost Quartz. When they took on Winter Duty, they began utilizing a weapon resembling a serrated sword, similar to the one Antarcticite used.

After Cairngorm arriving on the moon, Aechmea removes the remaining pieces of Ghost on their eyes, truly becoming themselves according to Aechmea. After this change, Cairngorm removes their powder again, returning the black skin they normally have.

Their clothing than changes away from the standard Gem uniforms to clothing designed by Lunarians that often displays a lot of skin and is white in colour. Aechmea remarks that he didn't believe that Cairngorm would choose these ones as Gems don't have any concept of sensual things.

Ghost Quartz described them as "rude, violent, selfish" as well as annoying. Ghost claims that Cairngorm was in control of their body when they recklessly climbed onto a sunspot cloud and almost got taken by The Lunarians. They seem to be very tough and strict. When they lost Ghost Quartz, they were infuriated and blamed it on Phosphophyllite, punching them several times and causing them to repeatedly need fixing from Rutile. At first, they acted harshly towards Phos. But they began to soften towards the other Gem after Phos had a breakdown and had confused Cairngorm for Antarcticite.

A few chapters into their introduction, Cairngorm began to act much kinder and gentle towards Phos and has become rather protective of them. When Phos lost their head to the Lunarians, Cairngorm even offered their former partner, Lapis Lazuli's head, to Phos. When Kongo seemed unsure of this, Cairngorm even began to offer their own head to Phos. However, during Phos's 100 year long rest period, Cairngorm reveals to Aechmea that Cairngorm wished to be crushed by the ice floes into nothingness and cease existing revealing that Cairngorm had suicidal thoughts.

After Aechmea reveals that reviving the lower hardness Gems would not be feasible, Cairngorm offered to have a synthetic outer layer attached to disguise themselves as Antarcticite and calm Phos' trauma. Aechmea questioned Cairngorm's dedication to Phos and upon examining the Gem closely, he discovered that their eyes still contained traces of Ghost Quartz which was affecting Cairngorm's behavior. He told Cairngorm to wait there while he got his tools if they wanted him to fix them. Cairngorm wanted to wait and be free, but the remnants of Ghost tried to force them to leave and remain under Ghost's influence, and the struggle caused Cairngorm to break apart. Seeing this, Aechmea understood that Cairngorm wanted Ghost Quartz removed from their eyes.

With Ghost Quartz's influence removed, Cairngorm's behavior changes drastically. They remove their powder, they don't react when Phos offers to give back Lapis's head, and they refuse to join Phos' expedition back to Earth. They also seem to have formed a close relationship with Aechmea, who encourages Cairngorm to choose a new outfit for themselves to help them regain their "sense of self."

Cairngorm is a variety of smoky quartz crystal, coming from the Cairngorm mountain range in Scotland. It usually has a smokey yellow-brown color, though some specimens are grey-brown. Smoky quartz is common and was not historically important, but in recent times it has become a popular gemstone, especially for jewelry.

Cairngorm being assessed by Sensei.

Cairngorm, raw, after having Ghost Quartz taken away from them. 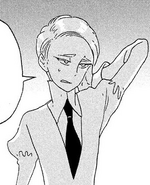 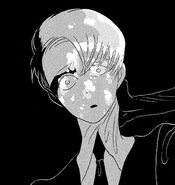 Cairngorm attempting to rip their head off 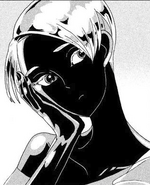 Cairngorm as of chapter 68 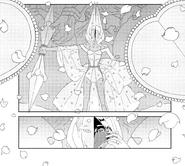 Cairngorm's attire as of chapter 70 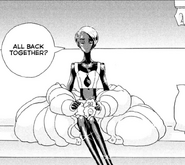 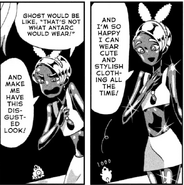 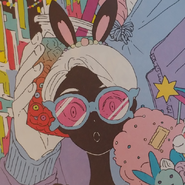 Cairngorm as seen in volume 10 art book
Add a photo to this gallery
Retrieved from "https://houseki-no-kuni.fandom.com/wiki/Cairngorm?oldid=11066"
Community content is available under CC-BY-SA unless otherwise noted.