Barbata is the possible lead scientist of the Lunarians, known as the "tech supervisor" to Aechmea. He's seen first running the Gem restoration project, and later teaching the Gems on the Moon about science. He has a great love for the culinary arts, which Aechmea uses to motivate Barbata.

Barbata has a generally relaxed and casual appearance. His hair is disheveled and messy but short, and he has a goatee. His eyes are much narrower than most other Lunarians seen.

He generally wears more loose fitting clothing, but is usually seen in an oversized lab coat similar to Rutile's.

Barbata seems to be a relaxed individual that preferably enjoys to take things at his own pace, but is often forced into doing other things. He is incredibly observant and critical, the only one displaying distress over the Gems' wishes to become nothing and/or Lunarians. As well as empathetic and friendly, giving out high fives to Phos and treating Gems in a friendlier way rather than speaking to them as if they were on a different level (like most other Lunarians do).

He is incredibly smart, figuring out the Gem restoration possibilities and technical details.

He also has a great passion for the culinary arts, especially baking. He is also quite good at it and is known for his excellent skill on the Moon. He bonds with Alexandrite over this. While he seems to be known for it, the skill seems to be considered a hobby towards Aechmea, as Barbata's job as tech supervisor takes precedent over his culinary. Aechmea uses this fact to persuade Barbata to agree to teach the Gems science by possibly allowing permission to Barbata to bake. 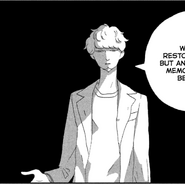 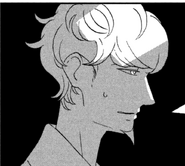 Barbata in his lab 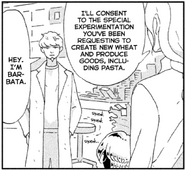 Barbata being persuaded by food

Barbata displaying awareness
Add a photo to this gallery
Retrieved from "https://houseki-no-kuni.fandom.com/wiki/Barbata?oldid=10009"
Community content is available under CC-BY-SA unless otherwise noted.