Start a Wiki
watch 01:04
Who is Antarcticite?
Do you like this video?

Antarcticite (アンタークチサイト, Antākuchisaito), also called 'Antarc', is one of the Gems who mainly does patrol duty and some other work specifically in the winter. Due to one of this gem's traits, during most of the year they 'sleep' in liquid form when temperatures are warm. They re-crystallize when the temperature drops during the winter. The colder the temperature, the harder and tougher they become.

They usually patrol with Kongo-sensei while the rest of the Gems enter hibernation though they were paired up with Phosphophyllite for a short period of time when the latter refused to hibernate. During this time, they were taken by the Lunarians at the Shore of Nascency.

Antarc has a white color scheme with tints of blue in their eyes and hair. They wear a white version of the winter uniform, which includes very short pants and a vest over a short-sleeved dress shirt along with a black tie. They wear black curved top-line ankle boots with stiletto heels and short black gloves. They have narrow eyes.

Their hair is styled very short, with their bangs being made of longer strands with one long prominent one being in their face generally. Their hair is parted to their right with side swept bangs.

Unlike the other gems who use an ordinary sword, Antarc's blade is saw-like with sharp teeth for cutting into ice. They also have stiletto heels on their boots to help in this endeavour.

Antarc is a perfectionist who acts like a soldier, marching and speaking with extreme formality, giving them a cold, almost apathetic aura. They are used to working alone, as all the other Gems hibernate during the winter when there is not enough sunlight to feed them and keep them active. Though they become partnered with Phos, they have difficulty working with another Gem and often end up doing most of the work. They are similar to Bort in being very blunt and judgmental, but deep down they are soft and kind. They point out the flaws in Phos, stating that the latter should do more than they can do in order to improve.

They are very fond of Kongo-sensei to the point of breaking their usually formal appearance in order to embrace him in a hug. They do not like to openly show this softer side though, blushing when they requested a hug in the first place, and being extremely embarrassed when caught in the act afterwards.

Due to the fact that Antarcticite is usually the only Gem active during the winter other than Kongo, it is likely that they have not much interactions with the other Gems. One of their duties is to ensure that the other Gems sleep peacefully, and that includes putting sleep-walking Gems back to rest. Phos managed to stay awake during winter to help out Antarc, so it could be assumed that at some point in the past, other Gems may have done so as well. The Gems are also known to fall into hibernation later or wake up earlier than each other, which may also imply that some of them have interacted with Antarc during that small window of time.

Nonetheless, Antarc seems to be fairly familiar with the other Gems. They knew enough about Phos to agree with the others that Phos never did anything useful. Antarc initially did not want to partner with Phos, preferring to work alone. But after partnering with Phos, they started advising them and teaching them many things in order to get Phos to improve. When Phos fell into the water and lost their arms, Antarc showed grievous concern and immediately jumped into the sea to look for them.

Antarc's affection for Kongo-sensei is one of their defining attributes. When a new type of Lunarians attacked and managed to break off their hand, Antarc became enraged, unwilling to part with any of their memories of Kongo. Before they were abducted by a second party of Lunarians, their last words to Phos is to keep Kongo-sensei company so that he would not be lonely during the winter.

Despite their brief time together, Phos got very attached to Antarc and was traumatized by their abduction; hallucinating and having nightmares about them being shattered to pieces. To them, Antarcticite was a kind and brave senior who was the catalyst for their change from a childish Gem into a very strong and competent one. Whenever Phos needs to make a difficult decision, they think of Antarc and what they would have said.

"We low-hardness Gems have nothing if not our courage." - Antarcticite, after repairing Phos.

"Make sure Sensei isn't lonely, take care of the Winter."- Antarcticite, after being shattered by the Lunarians.

Antarcticite is an uncommon calcium chloride hexahydrate mineral. It forms colorless acicular trigonalcrystals. It is hygroscopic and has a low specific gravity of 1.715. As its name implies, it was first described in 1965 for an occurrence in Antarctica where it occurs as crystalline precipitate from a highly saline brine in Don Juan Pond, in the west end of Wright Valley, Victoria Land. 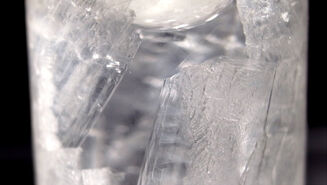 crystalized antarcticite in vial
Add a photo to this gallery 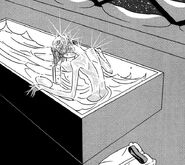 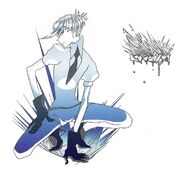 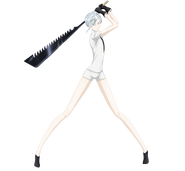 Antarc from the promotional cover of the anime.

Antarcticite on the box art of the blu-ray set.

Antarticite's face model sheet from the Original Artwork Collection included with volume 4 of the blu-ray.

Gouache painting of Antarcticite from the Original Artwork Collection included in the volume 4 blu-ray.

Model sheet for Antarcticite's sword from the Original Artwork Collection included in volume 4 of the blu-ray set.

Gouache painting of Antarcticite and Phosphophyllite tracking through knee-high snow from the Original Artwork Collection included in volume 4 of the blu-ray set.

Gouache painting of Antarcticite under the ice floes from the Original Artwork Collection included in volume 4 of the blu-ray set.

Antarcticite as seen in the Volume 6 character profiles.

Antarcticite appearing in Phos's dream
Add a photo to this gallery

Retrieved from "https://houseki-no-kuni.fandom.com/wiki/Antarcticite?oldid=10368"
Community content is available under CC-BY-SA unless otherwise noted.