Start a Wiki
watch 01:32
Who are Amethyst?
Do you like this video?
From Character Introduction:

Amethyst (アメシスト, Ameshisuto) are two twin Gems who mainly do patrol duty. They are individually named Eighty-Four (エイティーフォー, eitīfō) and Thirty-Three (サーティースリー, sātīsurī). They're two in one and partnered with each other. According to Yellow Diamond, twin Gems will not break when they touch each other, as demonstrated when the twins bash their heads together, much to the chagrin of their observers. They are both great at swordplay and were recommended to train Phos for a short time.

Amethyst has a purple color scheme and wears either the winter or summer uniform depending on the season. They also wear standard black shoes and knee-high socks but no gloves. Their hair is long, braided and styled to cover one of their eyes. Initially, Eighty-Four covers their right eye, and Thirty-Three covers their left eye. They later switch, then Eighty-Four switches again to deceive Phosphophyllite and take Thirty-Three's place.

in most recent chapters, Amethyst Eighty-four changed their hair to a more symmetrical shape. Eighty-Four's hair is now parted down the middle with braided bangs that go to the back, with their short straight shoulder length hair underneath. Thirty-Three's remains the same.

The twins work in tandem for a lot of things, often talking at the same time or finishing each other's sentences. It seems that the two rely on each other, but one of them states that they wish to be more independent, since if the Lunarians were to come for them, they'd would both be taken away.

Thirty-Three was initially unsure about taking care of Phosphophyllite, but when Eighty-Four joined them, they both became confident. They are kind and a bit silly, sometimes teasing other Gems like Phos. Together, they seem like they can be occasionally cocky and confident in their abilities. However, they are very caring and tend to put others' well-being first.

Amethyst 84 has learned to become more of their own individual and they serve as an assistant scientist on the moon. They seem to be highly interested in more of the psychological aspects in the science field, and have addressed that on Earth, the Gems have never received the proper treatment for the amount of trauma they experience, noting it especially with Yellow Diamond who is the oldest and has been through the most.

Amethyst 33 has recently learned to cope with their twin leaving, and believes after 200 years that they are alright. They think 84 is doing alright as well, and still feels connected to them.

During the beginning, Amethyst Thirty-Three states that they never spoke much to Phos before the younger gem was ready for combat. They enjoyed teasing Phos, causing the younger Gem to become tense when stating that the place they're assigned to patrol is a common place for Lunarians to show. During patrol training, the twins would give false alarms to Phos by expressing astonishment at passing animals. However, they are very kind as well, often speaking in a soft, slow manner. When they were shattered by the Lunarians and Phos was unable to fight back, Phos asked for their forgiveness but they apologized instead and claimed it was their own fault for being careless and trying to show off. Later, when Phos gained their gold arms, the younger Gem fought the Lunarians single-handedly in front of the twins, causing the two to hug Phos in admiration.

Based on how other Gems treated each other, it can be assumed that Amethyst has a friendly relationship with the other Gems and also like and trust their sensei.

Amethyst is a violet variety of quartz, and owes its violet color to irradiation, iron impurities (in some cases in conjunction with transition element impurities), and the presence of trace elements, which result in complex crystal lattice substitutions. The hardness of the mineral is the same as quartz, thus it is suitable for use in jewelry. The name comes from the Ancient Greek ἀ a- ("not") and μέθυστοςméthystos ("intoxicated"), a reference to the belief that the stone protected its owner from drunkenness.

Amethyst is the birthstone for February and the gem for the 6th and 17th wedding anniversaries. 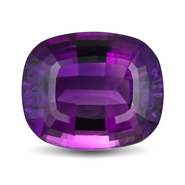 Polished amethyst.
Add a photo to this gallery

The Amethyst twins from the promo cover of the anime. 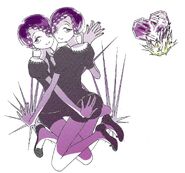 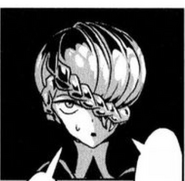 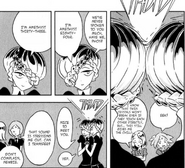 Amethyst 84 after 220 years later on Moon
Add a photo to this gallery
Retrieved from "https://houseki-no-kuni.fandom.com/wiki/Amethyst?oldid=10577"
Community content is available under CC-BY-SA unless otherwise noted.