Start a Wiki
watch 01:09
Who is Alexandrite?
Do you like this video?

Alexandrite (アレキサンドライト, Arekisandoraito) is one of the Gems who worked at the School as an expert on The Lunarians and is among the gems that accompanied Phosphophyllite to the moon. They do not research The Lunarians because they are interested in them, instead, they conduct the research as an attempt to overcome their condition. Alexandrite conducts this research in order to retain the "fresh-feeling of hatred" that they have for The Lunarians as a result of Chrysoberyl being taken from them. Kongo-sensei forbids Alexandrite from seeing the Lunarians as it causes them to go into a battle frenzy. They are one of the elder gems, however, their age is unknown.

Alexandrite's condition is a unique one in which upon seeing a Lunarian, they are filled with anger, and turn red as a result. Although occasionally, Alexandrite may also simply pass out.

Alexandrite, also called Alex or Alex-chan, has a blue color scheme and wears the winter or summer uniforms depending on the season. They wear the standard black shoes and sometimes black gloves, but never wear any socks. Their hair is loose and goes down to their thighs.

When they go to the moon, Alexandrite appears in their normal uniform, with the exception of a piece of cloth serving as a blindfold in order to not trigger their condition. They eventually gain a Moon outfit and special glasses to block their vision.

When switched into a berserker mode, their color scheme becomes red.

Alex is studious, especially in terms of information and literature relating to The Lunarians. They will pester the other Gems for details regarding any fights or encounters with the Lunarians, especially if there is a new type of Lunarian. Later it's revealed they enjoy learning of other things and take an interest in cooking despite not needing to eat.

It's said that this attitude of Alex is different from the one they had before Chrysoberyl was taken.

Alex has a berserker mode that is enabled when gazing at Lunarians. Alex is forbidden from looking or engaging with the Lunarians because doing so triggers this, which is known as their second personality. In this state, their hair turns red and they go into a battle frenzy, eventually collapsing before returning to their default personality but drained of energy.

However, occasionally Alex just passes out upon viewing Lunarians.

After Phos gained their golden arms and became capable of combat, Alexandrite praised the Gem's keen observation and commented that they've changed, thinking that the prior Phos was always bragging and exaggerating everything. Alex also chooses to go to the Moon with Phos, and offers to help with returning to Earth. They offer matter of fact details.

Bort thinks the blue Alex is the useless one, and the red Alex is uncontrollable.

It's assumed they were very close with their partner, Chrysoberyl, as others have mentioned how greatly losing Chrysoberyl affected Alex. Alex's demeanour was different before their loss, and it's possible that the red side developed as a cause of this. Their obsession with Lunarians also stems from losing Chrysoberyl, Alex remarking that thinking about Lunarians reminds them of why they hate Lunarians so much and to continue on with their research. However this changes on the Moon where after 220 years, Alex mentions they have forgotten about Chrysoberyl and have seen that the Lunarians aren't as bad as previously thought.

Alex seems to have a lot of trust in Benitoite as they demand that Benitoite be their eyes and assistant on the Moon. Benitoite can be seen being a host at Alex's restaurant on the Moon. However, Alex orders and pushes Benitoite around so it isn't a mutual healthy relationship.

Like how other Gems treat each other, it can be assumed that Alexandrite had a nice relationship with their other siblings and also liked and trusted their sensei. However recently they've become detached and colder and have been willing to help Phos destroy the Earth Gems.

Often described by gem aficionados as “emerald by day, ruby by night,” alexandrite is the very rare color-changing variety of the mineral chrysoberyl. Chrysoberyl is the third-hardest frequently encountered natural gemstone and lies at 8.5 on the hardness scale, between corundum (9) and topaz (8).

Ordinary chrysoberyl is yellowish-green and transparent to translucent. When the mineral exhibits good pale green to yellow color and is transparent, then it is used as a gemstone. The three main varieties of chrysoberyl are ordinary yellow-to-green chrysoberyl, cat's eye or cymophane, and alexandrite.

The alexandrite variety displays a color change (alexandrite effect) dependent upon the nature of ambient lighting. Alexandrite effect is the phenomenon of an observed color change from greenish to reddish with a change in source illumination. Alexandrite results from small scale replacement of aluminium by chromium ions in the crystal structure, which causes intense absorption of light over a narrow range of wavelengths in the yellow region (580 nm) of the visible light spectrum. Because human vision is more sensitive to light in the green spectrum and the red spectrum, alexandrite appears greenish in daylight where a full spectrum of visible light is present and reddish in incandescent light which emits less green and blue spectrum. This color change is independent of any change of hue with viewing direction through the crystal that would arise from pleochroism. 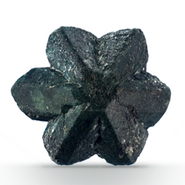 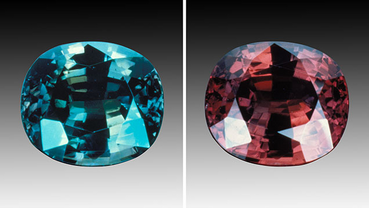 polished alexandrite
Add a photo to this gallery
Alexandrite is a birthstone for June, along with pearl and moonstone. Alexandrite is also the gem for the 55th wedding anniversary.

”月人のことを毎日考えて 新鮮な憎しみを 忘れないためよ”
"I think about the Lunarians everyday so I won't forget the fresh feeling of hatred I have for them."

- Alexandrite when asked by Phos if they like the Lunarians. 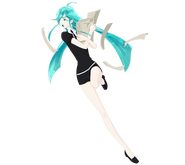 Alexandrite from the cover of the promo for the 2017 anime.

Alexandrite in the manga 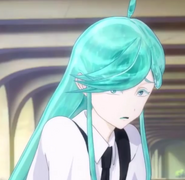 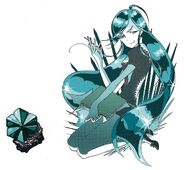 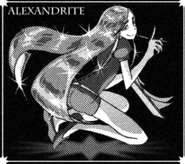 Alexi displaying reluctance at looking at a Lunarian

Alexi changing to Red in the manga

Alex on the Moon with special glasses that block their vision

Alex with a Moon outfit 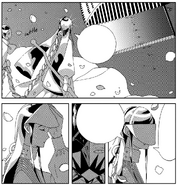 Alex's moon outfit details
Add a photo to this gallery
Retrieved from "https://houseki-no-kuni.fandom.com/wiki/Alexandrite?oldid=10578"
Community content is available under CC-BY-SA unless otherwise noted.