Aechmea (エクメア, Ekumea) is the leader of the Lunarians, appears to play an antagonistic role throughout most of the story, though he is not introduced until later on.

He is presented as a man with light hair and eyes, with a mole under the left eye. His clothing and hairstyle vary and he seems to be able to change them at will without physically doing anything. He first appears dressed in Buddhist-style clothing, similar to the other Lunarians, and has long earlobes. During their dinner with Phos, he wears a Western-style suit, and has shorter earlobes. Later, he appears with an unbuttoned dress shirt, round glasses, and rather prominent rabbit ears. 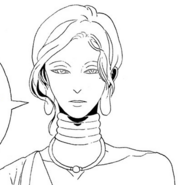 Aechmea with glasses and prominent rabbit ears.
Add a photo to this gallery

He appears to have a calmer demeanour, but is very wary of the eternal life the Lunarians possess.

He is extremely intent on having Kongo pray for the Lunarians in order to allow them to pass on, viewing the 'eternity with the restless nature of humans' to be a 'terrible curse.' To achieve this, he is prepared to go to great lengths. Over abducting gems and grinding them into dust, he displays no remorse, showing he can be very cruel. Aside from that, he generally behaves politely.

After so long of failing to persuade Kongo, he has become desperate and prone to moping. He appears to have some degree to self-loathing, calling the Lunarians, including himself, 'ghosts of garbage', and being ashamed of his real name, leading Phos to describe him as a 'complex guy.' However, he retains some hope that Phos will save them.

According to other Lunarians, he gets drunk easily.

As Phos and the other Gems speak with more Lunarians, they discover that Aechmea also has a controlling personality. He appears to be used to getting what he wants, which extends to controlling the names and roles of each of the Lunarians although they appear to possess the capacity of making remarks about him, although not necessarily to his face.

Aechmea has displayed aggressive manipulation tactics that he may or may not be aware of. This has included terrifying others into submission, to the degree that some Lunarians avoid making him upset altogether. This has also been displayed between Aechmea and Cairngorm, in which Aechmea nearly transforms into a beast form upon Cairngorm returning from getting Phos, Padparadscha, and Yellow Diamond from Earth.

However, he seems to be quite aware of his charismatic manipulative tendencies, mainly in the sense that he withholds information in order for his own goals to be reached and the other party thinking that they are assisting, despite it possibly meaning the other party will ultimately reach a bad end.

As their leader, he is obeyed and loved by all Lunarians, as stated by Cicada, in a manner similar to the Gems' relationship with Kongo as noted by Phos. They care about him, becoming annoyed at Phos, accusing them of 'torturing' Aechmea with their questions, although he then tells them to stop being rude to their guest. Cicada seems to admire them, and is flustered when they accidentally reveal Aechmea's true name to Phos as they know they are ashamed of it. Aechmea sees Cicada as a softie.

Phos, although they are currently conspiring with him to betray Sensei, remains very cautious of Aechmea, believing it to be far too early to trust him, and they are aware of their cruel nature. They are confused at first by his desire to pass on, asking why they can just keep living. Aechmea seems to treat Phos as a business partner, before slowly caring less for them as Cairngorm becomes his attention.

The nature of their relationship is debatable, and hasn't been revealed whether or not Cairngorm is forced to be in a relationship with Aechmea. However, what is known is that the two are married and appear to be together with Aechmea showering Cairngorm with gifts and affection most of the time. However, Cairngorm has mentioned on several occasions that Aechmea is "scary" and Aechmea losing his temper at Cairngorm to the point where he destroyed the landing strip. He allows Cairngorm to wear what he describes as "sensual" underwear and commenting on how he thought Gems had no understanding for such a thing.

Retrieved from "https://houseki-no-kuni.fandom.com/wiki/Aechmea?oldid=10076"
Community content is available under CC-BY-SA unless otherwise noted.